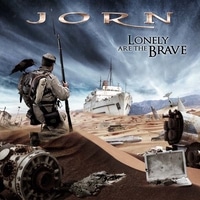 Review:
Lonely Are The Brave, the sixth solo album from Norwegian born singer Jorn Lande, brings the essence of classic heavy metal and mixes it with current issues and affairs from the world of today. With many meaningful lyrics of war and suffering, this album is a statement of anger and reflection in times of hardship.

The title track uses distorted melodic guitars that are supported by a strong and controlling rhythm section, as it clearly demonstrates the soul, passion and David Coverdale aura of Jorn‘s vocals. With a very powerful, almost operatic voice, Jorn makes this album very vocal oriented and for all the right reasons. “War Of The World” shows the accuracy and precision of the CD’s guitar work as the solo uses dual twin guitars, with the flow and movement of the music making the vocals and message all the more meaningful.

More classic guitar riffs continue throughout the album. “Promises”, one of the heavier tracks on the record, uses melodic licks, vocals and driving rhythms that follow a memorable and strong chorus. The final track on Lonely Are The Brave, “Hellfire”, is an epic and larger than life creation. Filled with dramatic and disturbing lyrics, sustained attacking guitars and pounding drums, the song makes the listener feel as if they are on the front line of attack.

Lonely Are The Brave is a powerful metal album, emphasizing both the honor of war and its destitution, without losing its edge and executing classic metal power. This CD is a must have for any Dio or Whitesnake, as Jorn‘s vocals occasionally sound eearily familar to those of David Coverdale.