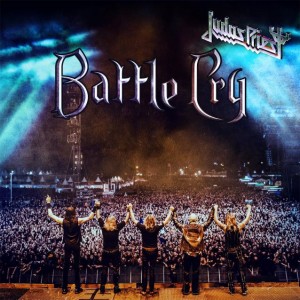 Review:
Like so many metal/rock acts nowadays, the protocol after a tour is to release a live CD/DVD album. Judas Priest have done so with a pretty decent live album of some newer songs (from their last studio release Redeemer Of Souls), classic tracks (“Metal Gods”, “Breaking The Law” and “You’ve Got Another Thing Comin'”) and some songs that are classics but aren’t on all live Priest releases (“Devil’s Child” and “Jawbreaker”).

“Dragonaut” — Travis kicks the band in and Priest are off like a rocket! Halford sounds mean and demented. I mean, he gets into the role here vocally! Tipton and Faulkner just riff away with some real great playing and the band is off to set the show out of the gate with a new track. It’s a great move especially since “Dragonaut” is a great song to begin with.

‘Metal Gods” — This song is a classic! I’m sure it has been played on every tour since 1980’s British Steel! Why wouldn’t it? “Metal Gods” is a heavy like creeper track with a little slower pace than some other Priest songs in the catalogue. “Metal Gods” is a cooker of a track! I love the solo as back in day, you have to hand it to Tipton and KK Downing as they set the dual lead guitar action bar high! “Metal Gods” has it all! Straight ahead power riffs all smothered up by the drums! Yee Haw! It’s a metal fest!

“Devil’s Child” — Once I seen this song on the track listing between this one and a few others that I haven’t seen on the last few Priest live albums, I was sold. Halford tells Wacken that the “Priest Is back!” I love the opening riff of “Devil’s Child” and the song is a straight ahead rock track that delivers all the trimmings of a great Priest song! Tipton and Faulkner lift off during the solo and Halford‘s voice lifts off as well! An awesome addition to this album.

“Victim Of Changes” — -Another great song from yesteryear! This song just is plain out a classic! Over eight minutes of huge riffs, tempo changes, tons of guitar soloing and the sound is heavy! Priest have set the bar high with this 1970s classic but here in 2016, they deliver on all fronts! Check out Halford‘s scream at the end of this song! It’s just like listening to the great Unleashed In The East live album again!

“Halls Of Valhalla” — Another newbie from Redeemer Of Souls! It’s good to see Priest not ignoring their current material. For many though, they just want to hear the classics whereas the diehards will understand when a few tracks are dropped into the mix — that it’s alright to keep the creative juices flowing and to not become just a straight nostalgic act.

“Redeemer Of Souls” — The title track for the current studio album is played before the Wacken faithful and it’s a good representation of where Priest are headed. Nice drumming by Travis and as always Hill is just a solid no frills bass player who knows his limits in the Priest cycle! “Redeemer Of Souls” indeed!

“Beyond The Realms Of Death” — Whoah! Another surprise from the back catalog as this song comes from Stained Class and what a song! One of those like many Priest tunes that starts off slow with a chill metal vibe ramping up during the chorus that chills out during the verse than builds back up into the solos. Basically, what I’m getting at is this is eight minutes of classic Priest! Welcome back!

“Jawbreaker” — Yes! Defenders Of The Faith is represented with “Jawbreaker!” Tipton, Faulkner and Halford start off and when Hill and Travis join in, it’s a great throwback number. No cheese here from ’80s Priest here folks! The guitar during the solo just rips your head off! JaaaaawBreakker screeches Halford! Yes!

“Hell Bent For Leather” — Any Priest concert without this song being played would be like AC/DC not playing “For Those About To Rock!” Who does not love the opening with Halford‘s Harley Davidson revving up and the massive tons of guitar feedback blowing against Halford and his two-wheeled metal ride! Great verses along with a real cool catchy chorus! Hell bent indeed!

“Breaking The Law” — This was the first tune that iTunes released with the preorder. “Breaking the wha?  Breaking the wha? Breaking the law!” Halford informs the crowd and Priest lay down another golden track played at hyper speed guitars at break neck speed. The chorus is soooo damn catchy and how about the simple yet effective playing of Tipton and Faulkner?They make a great tandem. On one side, you have the ol’ grizzled metal master Tipton flinging the leads and solos which we all love and heard on many albums, and on the other side, you got the young gun Faulkner stepping up and laying down some serious law on guitar.

“Electric Eye” — Oh yeah! I love this song! Always have! Tipton and Faulkner rip out the gate with some serious sounding heavy guitar. Judas Priest are not fooling around here! Travis and Hill are locked n’ loaded and rock the rhythm while Halford nails the vocal as he always does and once again, all the Priest metal maniacs basically sing the chorus and Tipton launches off into solo-ville. I love the end of this song when Halford sings “I’m detected, electric, eye!” Bam! A classic!

“You Got Another Thing Comin'” — The song that broke through Priest back in 1982 is another one of those that “have to be played or else” tracks! This version though is 11 minutes long! Priest somewhat noodle around with the middle sections with a ton of guitar workout material and vocal banter. It goes and goes as Priest don’t want to shut it down! It’s the end of the set and of course it’s a good one minute ending….

“Painkiller” — Travis asks the crowd “Want one more song?” The crowd hollers back “Painkiller!” This track is frigging heavy!  Travis sets the pace with a real crazy amount of double bass drumming — a clinic so to speak! Halford goes off the rails vocally and man, it’s hard to believe the cat is over 60 years young! Last song of the night and he’s still soaring vocally! Impressive! To no one’s surprise, the guitars and Travis just don’t let up! If you need to get moving in the morning, put this version on and your adrenalin will do the rest!

Battle Cry is a great live album worth the cash! I believe the DVD has a few more tunes added but for this iTunes release, it has a ton of classics, which I’m glad Priest dug out and give them a whirl. Get this folks!

Judas Priest’s Redeemer of Souls tour was one of the most extensive of the group’s career, and now fans can relive the experience with Battle Cry. Recorded …