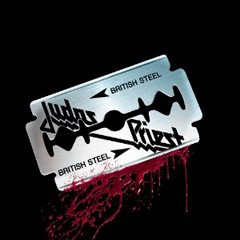 Review:
What do I need to tell you about British Steel that hasn’t been said already? It was Judas Priest‘s North American breakthrough album — the record that secured them as headliners for decades to come. Their influence, like Black Sabbath‘s, is heard in hard rock and metal from the ’80s to the present day. As you probably already know, British Steel was remastered and reissued in 2001 with the bonus live cuts “Red, White & Blue” and “Grinder”, along with extensive liner notes.

British Steel – 30th Anniversary Edition features the complete program along with the live bonus cuts. It’s nothing to get excited about if you’ve got it already, right? Well, in addition to the CD there is an accompanying DVD shot in Hollywood, Florida in August of 2009. Judas Priest played the entire British Steel record from top to bottom along with seven additional hits. The DVD showcases Judas Priest doing what they do best, and that is playing live. Rob Halford can still belt it out at times, and as heard (and seen) on here he limits the use of his range for select cuts without embarrassing himself. The twin axe attack of K.K. Downing and Glenn Tipton can still tear your face right off your skull and bassist Ian Hill stands in place as always, pumping along and holding down the bottom end. The surprise here is drummer Scott Travis, who stays true to the original performance rather than showing off his chops and straying away from Dave Holland‘s original groove.

The DVD was shot with high definition cameras and is absolutely beautiful. There is an interview with the band which makes a great companion to the Classic Album’s British Steel documentary. For the collectors, Judas Priest have a limited edition version of this package that includes the live CD which features some of the audio from the DVD. This particular package is sold exclusively on their website.

In short, whether you already own the original British Steel or the 2001 reissue, you can’t go wrong with this package.