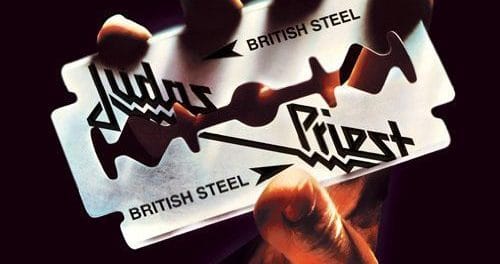 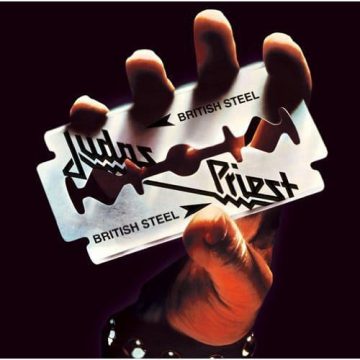 Review:
When people mention great metal albums, it shocks me that British Steel is not up higher on the lists. In his autobiography, K.K. Downing stated that he felt the release was “flawless.” Many know the classic looking album cover, which should be listed as one of the most memorable covers in hard rock/metal history. So why do not people and critics list this higher as one of the best albums ever?

The great opener “Rapid Fire” (I will be using the 2001 remastered version for my review, so the song listings may be different than what some of you have, but it doesn’t affect the flow of the album) kicks off with powerful drumming, guitars, and the screams of singer Rob Halford at the end of the song. This track does not have the standard verse / chorus / verse structure in songwriting. The song stops and then kicks back in again, and also has the strong guitar work of Downing and Glenn Tipton. The lyrics of “pounding the world like a battering ram” is a perfect statement in describing this track.

“Metal Gods” is one of my favorite Priest songs, with its marching / chugging style rhythm, along with the sound effects added to the song. In his autobiography, Downing states that the sound effects were kitchen utensils and pool cues that they had in the house where the album was being recorded. This song has a science fiction style to it, with the robots and machines taking over, ala The Terminator, but without the spacey lyrics that a Rush song might have. The wickedness of the guitar solo on the track isn’t overdone, and fits nicely for the end of the human world theme.

The first time I actually saw Priest on television was seeing the music video for the next song “Breaking The Law.” The bass playing of Ian Hill carries this tune, and has Halford singing at a lower range than that of his signature wailing. This shows the depth of Halford‘s vocal range. Keep in mind, I was not into heavy metal when this release came out, and the most “heavy” music I was listening to was KISS and the glam bands of the 1980s. It wasn’t until later I started listening to Priest albums, as opposed to the radio played songs. “Breaking The Law” was the first encounter I had with the band due to the video, but I did not run out and buy the record, nor did I pay much attention to them because the song was not on my local radio station. The song has become a standard metal classic, and still holds up decades later. Many people who are not familiar with the band know the song, due to television commercials or can recognize the song when told the title, which shows its staying power throughout the years.

“Grinder” impresses me with the crisp drum sound on it (which is throughout the remastered version), even when I got the cassette of the release. This was the first album with drummer Dave Holland, who replaced Les Binks, and even today I prefer the drum style on the album. It’s basic but solid, similar to the drumming on AC/DC songs, where a solid powerful beat keeping time can make the song as opposed to plenty of fills. The dynamics on this song is great to hear as well, from slowing down after the solos and then gets back to the groove again. There is no fade out here either, the song comes in and then stops.

“United” has the creeping sound that I liked in “Metal Gods,” and the song has a radio friendly style that is similar to maybe something that could come from Queen. The song has a protest style to it lyrically, where the drums mostly carry the song, with no guitar solos, only the chords playing throughout. This is a different style of song in my opinion when some think of Judas Priest, with their double onslaught of guitars and powerful vocals in most of their work. This would be a great arena song.

One of my all-time top five songs by the band has to be “You Don’t Have To Be Old To Be Wise.” This should be a well known rock anthem, sitting side by side with the more well known labeled “anthems,” with the lyrics of the youth rebelling against the stereotypes that are given to them for being young by the older generations. The song for me also has a theme of choosing your own path to happiness going against the conformity rules on how things must be done. Besides all that deepness I mentioned, it’s just a great rocking song.

I would have never heard of Judas Priest (at least when I did) if it weren’t for MTV and professional wrestling. I was (and still am) a huge fan of the 1980s wrestling, and when the wrestling boom was going on (with the Rock ‘N’ Wrestling term), I could watch different wrestling shows every day of the week. One of my favorites was the American Wrestling Association  (A.W.A.) from Minnesota. One of the tag teams there came to the ring with the song “Living After Midnight.” The team was called the Midnight Rockers and featured future WWE Hall of Famer Shawn Michaels. Although I wasn’t a huge fan of the tag team, the song I heard blaring when they came to the ring made me want to find out who sang the song. This was pre-internet days, so it took me a long time before finding out it was Priest, mainly because most of the people I hung out with didn’t listen to metal. Case in point, one friend had sworn it was KISS who did the song. Because I loved this song so much, I finally got a cassette tape of this album at a bargain bin years later, just so I could have that song, which became my first ever Priest purchase. Now the song is a classic standard, but every time I hear this song, I think of those days watching wrestling.

Ian Hill shines the next song “The Rage.” This is another unique song that is not like the others on the album, with its funky/reggae style to it. Downing wrote in his book that the song was “completely unlike anything we’d ever done.” The song has several dynamics to it, from a mellower style on the verse to getting stronger on the chorus. This could be a song labeled as a heavy metal version of The Police in the opening. Yes, I know the album came out before the Sting led band’s popular days, but the similarities are there. The fact that the band was taking metal into a different direction, while not going too far off the path of the tone of the whole album, is a testament to their skills. This is a rare song that doesn’t get enough credit among mentioning the band.

“Steeler” ends the record on a heavy note unless you have the remastered edition with the bonus tracks. From watching several live videos of the band on YouTube, this song is a powerful live as it is on the album. This song is like a powerful locomotion speeding on the tracks, dragging the listener to who knows where, but they are going there with rapid intensity. The guitar shredding on the song adds to the journey as well.  This is a wonderful ender to the mighty album.

The album’s Bonus Edition has a song called “Red, White & Blue,” which is an anthem of sorts in honor of the band’s British heritage. Although not really a metal song, this ode has more lyrics than most Priest songs, and does not have the guitar shredding style of the band, which to me, details their musicianship that they are not one -dimensional. A live track of “Grinder” ends the bonus tracks, which gives the listener a taste of the band in a live setting for those of us who do not have any of the band’s live CDs.

So, is British Steel a flawless release? For me, there are songs that have radio friendly tunes (that do not lessen up on the power), songs that experiment with the music by adding different styles (“The Rage”), and has strong vocals, ripping guitars, and crisp, solid drumming, with no fillers on the album. If this is not the characteristics of a flawless metal record, I’m not sure what is, but the mighty Priest comes as close as one can get with British Steel.