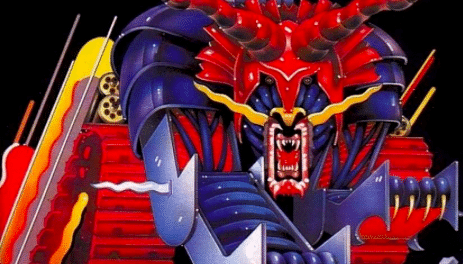 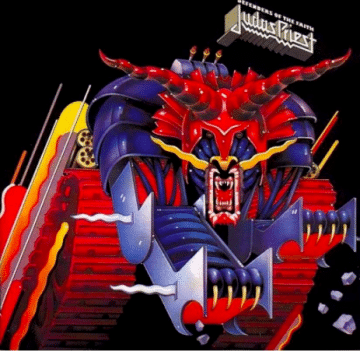 JUDAS PRIEST
DEFENDERS OF THE FAITH
Released on January 4, 1984 (Columbia)

Review:
Along with Paul Di’Anno era Iron Maiden, Mötorhead, early Saxon and Judas Priest were part of my formal introduction to what I consider “heavy metal” in the late ’70s. Yeah, throughout the seventies, I was brought up on a steady diet of rock and roll that included everything from motown to glitter and the more rocking stuff like KISS and Deep Purple. They were definitely a huge part of it but in my ears, even the bits and pieces I was exposed to at a very early age from Black Sabbath were mild in comparison. Don’t get me wrong, as I grew, I fell in love with Sabbath songs that I was too young to grasp when they were originally released but for me, my true metal heart awoke in 1979 when I was caught in the sonic barrage of Judas Priest albums Stained Class, Hell Bent For Leather and the brutally iconic live album Unleashed In The East. This may also explain why (and this may be blasphemy to some) Heaven And Hell (released the following year with then new singer Ronnie James Dio) is my all-time fave Sabbath album. Anyway, despite already loving Deep Purple, Rainbow and other rocking bands, it is my belief that Judas Priest are primarily responsible for taking me that next step from rock and roll fanatic to hard rocking, heavy metal headbanger. So much of the stuff coming out of the UK and Europe was just amazing and living in Germany afforded me the opportunity through music festivals to see bands like Accept, Scorpions, Saxon and more early on. Had I been stateside, it would have taken several more years to experience these bands in a live setting.

Right off the bat, I fell for the grinding, chugging, power anthems of Priest partially because the music was physically powerfully but also because the lyrics provided a powerful ally against peers higher up the school popularity food chain. Never one to fall in line with trends (in the late ’70s when new wave and disco were on the hip, I was still cranking the Sweet, Bowie and Mott The Hoople), my shaggy haired, denim clad self stood out like a hooker in a nunnery amongst the Izod pimping Atlanta, Georgia throng when I arrived in school in 1981 flaunting a British Steel patch on my jacket. To this day it’s still a wonder that there was that one person in the school that “got it” but Priest, AC/DC and Ozzy became fight music for a couple of dirty rough looking kids in a sea of brightly clad preppies. But it didn’t end there. By the time I escaped to Northeast Georgia in 1982, Priest and harder rock had caught on to the masses in America. But while kids were proudly boasting about their new discoveries a la British Steel and Point Of Entry, I was calmly responding by flashing vinyl and cassettes of early Priest to this new group of bandwagon jumpers, many who also were preppies. In the eighties, Priest had transformed from Metal Gods, to Anthem Heroes and then back into even heavier Metal Gods. Screaming For Vengeance was brutal as was 1990’s Painkiller but in the middle of it all, Judas Priest openly laid claim to what they had been preaching for years. The Judas Priest band members were soldiers for the heavy metal cause and said so via the title of their 1984 release, Defenders Of The Faith.

Falling somewhere between the chugging early anthems and the band’s more recent brutal screamers, Defenders Of The Faith was made for 1984 hard rock and remains the group last consistently worldwide top 20 selling album just ahead of 1986 release Turbo. While many critics panned the album for its similarities to Screaming For Vengeance and lack of a more commercial anthem along the lines of “Living After Midnight”, it has to be noted that on its release, no one would have considered even “Living After Midnight” to fit anything considered “commercial.”  This was merely Priest being Priest and yes, despite eventually donning some pretty colorful leathers and sneaking in keyboards, throughout it all, Priest remained harder than the average band. For all the critical trash talk, Defenders Of The Faith was not only heavy, but filled with classic Priest “fight” songs and contains classic Priest songs in “Freewheel Burning” and “The Sentinel” that could have easily and deservingly rocked alongside classic tracks on British Steel or any of other “must have” Priest releases.

But the power, grit and metal clout of the band is what was most on display throughout the period. In place of the typical second single power ballad, Priest shot out a trio of hard rocking tunes culminating with third single, the ever popular ”Love Bites”, a track with as classic a Judas Priest grind as any. In other words, Judas Priest were gonna live and die defending their  heavy metal faith and metalheads couldn’t have been any prouder to crank the band’s music and raise a fist (and perhaps a few middle digits) to mainstream media and what was deemed “proper” society at the time. So honestly, who really gave a rat’s ass what some Grateful Dead spinning Rolling Stone asshat thought?  This was Judas Priest, a band noted for taking the stage in the blazing sun of the US festival in full leather, chains, and studs gear. Danger of heatstroke? Bully that! Far better to die of heatstroke than not go full heavy metal faith steam!  Judas Priest would lead by heavy metal example, and myself and other take no guff soldiers followed along.

OK, so yeah, even loaded with great metal tracks, Defenders Of The Faith might not be considered by some as classic as say Unleashed In The East, or the power trio of Priest albums that preceded Defenders but as the centerpiece of the band’s albums starting with the now legendary British Steel in 1980 and ending with 1990’s Painkiller, it still stands as the perfect Judas Priest release at the time. While not the ultimate Priest release, it’s hard to argue with an album that burns out of the gate in classic Priest face-melter fashion with a track like “Freewheel Burning”, a song filled with references to speed and all matter of high octane. It’s full on classic Priest like Chuck Berry shot through a distortion pedal and out a Marshall amp pretty much equals AC/DC.  And yeah maybe, just maybe, half the free world isn’t familiar with the song “Jawbreaker” but that hasn’t kept the tune from inspiring bands like Germany rockers Rage and Swedish power metalheads Sabaton to cover it. A badass song is at the end of the day a badass song and most often than not, even a deep cut on a Judas Priest album is more badass than the average hard rock bands’ best tune.

Now remember I mentioned those pesky critics losing their minds over the lack of a tune like “Livin’ After Midnight” or “You’ve Got Another Thing Comin’?” One has to wonder if they even listened past track two because “Rock Hard Ride Free” is filled with pretty much all the ingredients present in half the hard rocking singles released in the ’80s by the likes of W.A.S.P., Keel and many more. The only difference being that in 1984, Priest didn’t need to pimp out what might been their most commercial option on an album, the band had the power to shove whatever song up the music industry’s ass they wished so one has to figure that is why they went with other tunes like “Freewheel Burning” and “Love Bites” as singles. Well that and the fact that they are both kick ass songs. Chances are, “Rock Hard Ride Free” would have done well as a single but despite the eighties being a time when labels returned to placing concentration on singles over albums, Priest was, and to this day still is, a band hell bent on releasing all killer, no filler albums.

Of course whether they have achieved this overall will always be a matter of debate but one just has to listen to the highly acclaimed 2018 release Firepower for proof that to this day, Judas Priest remain a band who chooses to focus on complete albums over simply a strong track or two. Heck these days, with bands like KISS, Skid Row and more choosing to shy away from creating new albums, it’s actually a metal godsend that a veteran band like Judas Priest still has the ability and desire to put out killer new hard rock and metal that STILL kicks ass. Even better is that much like 1984 when the music industry demanded hard rock bands stick to some tried and true formula to sell product, Priest continue to stick to their guns and stick it to the norm as tried and true defenders of the faith. Yeah, along the way, they might have tried a few things that made the average fan raise an odd eyebrow, but in the end, a legion of defenders grew and few lost their faith.

In 1984, Judas Priest were still simply metal, chain, and stud forefathers of heavy metal and 35 years later, the band continue down a road that has sadly left many of their contemporaries watching from the shoulder. Priest are the part of the final remnants of a dying breed that thankfully will leave behind great albums such as Defenders Of The Faith as part of an eternal soundtrack for future soldiers of hard rock and heavy metal.