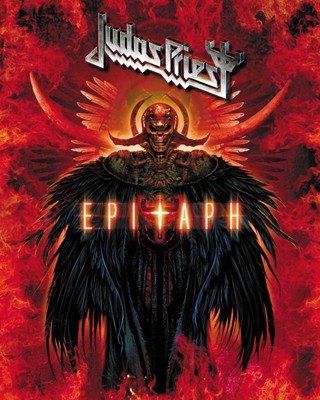 Review:
While the reasoning behind the brand new Judas Priest DVD Epitaph is to celebrate the legendary band’s historic 40th anniversary of playing heavy metal, there’s not much on this career retrospective that hasn’t already been a staple in the Judas Priest setlist.

Judas Priest have already issued a number of DVDs in their career, the most recent being 2005’s Rising In The East which documented the return of singer Rob Halford after departing for a few years to concentrate on his solo career, but the ‘Metal Gods’ have a fantastic history and an equally killer back catalog that warrants another DVD release. While “Prophecy”, from the ill received concept album Nostradamus, and “Blood Red Skies”, from Ram It Down, make appearances on this collection the rest of Epitaph consists of the hits you’ve heard countless times before.

One thing you can expect from Judas Priest is a top-notch product and Epitaph is no exception — visually and sonically. You can always expect stellar drumming from Scott Travis, a chugging bass complete with lack of stage presence from Ian Hill, ripping guitar work by Glenn Tipton, and while Halford is showing wear and tear with age he still delivers a powerful and charismatic performance. Halford is livelier on this performance, filmed during the final date of the Epitaph World Tour at London’s Hammersmith Odeon, and he’s not hunching over like he has been on past tours. And when did K.K. Downing strap on a Les Paul? He hasn’t — its newcomer Riche Faulkner who fits seamlessly into the band and brings youthfulness to the group’s live performance. While it’s unknown if Downing will return at some point, unlike the band’s effort to ‘replace’ Halford with Tim ‘Ripper’ Owens the addition of Faulkner hasn’t been met with the same kind of backlash.

Epitaph is a great place to get all the Judas Priest classics that you know and love in one collection — live of course.

Reviewed by Ruben Mosqueda for Sleaze Roxx, May 2013