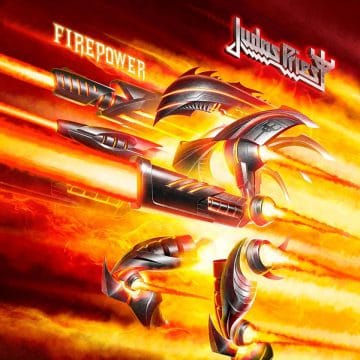 Review:
Well, Judas Priest — Do I need to outline their nearly 50 year impact on metal music? These English bastards have done things that few other bands could even dream of. Sure, the story of K.K. Downing’s departure, coupled with Glenn Tipton’s fight with Parkinson’s Disease and subsequent vacating the tour might make one question whether Priest are still worth it. But damn, it sure is, on this album at least.

I was pretty good with Priest’s 2014 offering Redeemer Of Souls. It sure beat Nostradamus by a mile, and anyone with a modicum of foresight could have recognized that the band wasn’t at its best there.

Firepower brings me back to a combination of pre-Turbo and Painkiller era Priest. There’s some heavy stuff to behold, and it still delivers the amazing guitar and vocal lines you’ve grown accustomed to.  On this album, compared to classic Priest, there is an obvious lack of dueling Glenn and K.K. guitar lines, but that’s ok, since K.K. left so long ago. But if you’re new to Priest, you won’t care. If you’re a retro fan, then appreciate what it’s become. I still wonder about the impact Scott Travis had on the band back in 1990 after the departure of drummer Dave Holland.  Consider Ram It Down vs Painkiller.

There is no denying that the first track “Firepower” is full on metal. The verses may be a bit limited, but the chorus and solo are wild. Certainly, “Lightning Strike” brings me back to the 1990 era Painkiller. And yet, “Evil Never Dies” is very much an early ’80s metal sound, like Twisted Sister, despite the double bass drum in the chorus. It’s all about the production from here on in.  Wow, does “Never The Heroes” sound like Accept or maybe Saxon.

I can go on about “Necromancer”, “Children Of The Sun” or the rest of the album. What stands out for me is “Flame Thrower” with its killer guitars, strong vocals, and inventive bridge/chorus mix. Somewhere, it has to be said that Rob Halford‘s vocal range is still spectacular, although he has now become more selective about when he uses his high notes. At age 67, good for him!

There is much talk about Glenn Tipton’s departure from Judas Priest‘s current world tour, and I get that people want to see the original players on stage. This album seems to be Glenn’s final swan-song, and thanks to him for the decades of music he helped create. Regardless, don’t let the negative media prevent you from enjoying the new Judas Priest album Firepower.