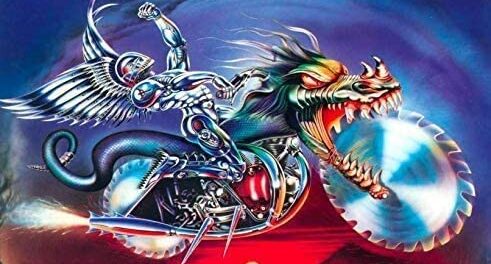 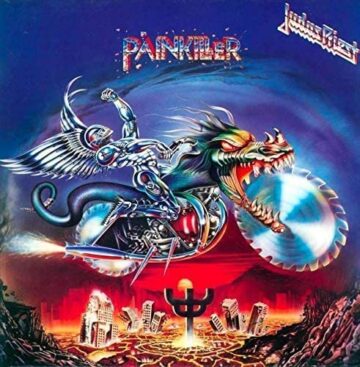 Review:
Judas Priest were on quite a run between 1980 through 1986. They had released a string of records that broke them in America. 1986 brought us the maligned Turbo album which was layered with synth-guitar and songs that leaned heavily toward reaching the ‘glam’ audience rock of the day. The album featured standouts cuts like “Turbo Lover,” “Locked In,” the cheesy “Parental Guidance,” and my personal favorite track that opened that tour — “Out In The Cold.” Although Turbo was a departure in sound and ‘look’ for the mighty Priest, the follow-up, 1988’s Ram It Down was a continuation of Turbo with vocal gymnastics and less synth-guitar. Overall, Ram It Down wasn’t a bad record. They had tried to right the ship a bit, but they were using a lot of material that was to be used for the ‘Twin Turbos’ album, which was ultimately reduced to a single album. It was a bit late. They had begun to lose the audience and the lead off video, (and only video for that matter was) the cover of Chuck Berry’s “Johnny B. Goode”, didn’t help the cause. I was surprised to have seen Dokken open for Priest on the Fuel For Life Tour in support of Turbo, but was equally as surprised to see Priest bring Slayer out on the Ram It Down tour. Slayer were on the rise and might have been just as ‘big’ as Priest (in America) by that point.

The Ram It Down album was a huge disappointment and adding Slayer as support did very little to fill arenas. When the tour ended, Priest were sued for alleged ‘subliminal’ messages in their cover of the Spooky Tooth’s “Better By You, Better Than Me” featured on their 1978 album Stained Class. Two teenage fans killed themselves in Reno, Nevada in December of 1985 and the families sued in an effort to place blame on someone for their losses. The trial took place in 1990 and the suit was eventually dismissed. Judas Priest had ‘won’ but they were emotionally drained. Drummer Dave Holland had left by that point and surprisingly, they had been working on a new album. Judas Priest had recruited drummer Scott Travis who was best known for his work for Shrapnel Records’ neo-classical/shred band Racer-X.

Painkiller was a departure from anything Priest had done before, they were a metal band that perhaps had lost their way once they got a bite of the apple. With Painkiller, Priest threw down the gauntlet and was sending a message to the thrash metal acts, that message being “Don’t count us out yet!” The title track “Painkiller” dominated Headbangers Ball, Much Music’s Power 30 and was a staple on the syndicated radio station Z-Rock. Painkiller was a hit with the diehards along with some of the kids that were into bands like Metallica, Megadeth, Anthrax, Slayer and the like. Armed with an arsenal songs that included “All Guns Blazing,” “Between The Hammer & The Anvil,” “Hell Patrol,” “Leather Rebel” and “Night Crawler,” the album was that was the equivalent of having a napalm bomb exploding in your ear canals. The only synth to be found (courtesy of Don Airey) was on “A Touch of Evil” which entered ballad territory and matched the epicness of classics like “Beyond The Realms Of Death,” “Blood Red Skies” and “Dream Deceiver.” Judas Priest had a hit album on their hands and while it didn’t result in a multi-platinum album, it raised the bar.

Painkiller was to Priest what Revenge was to KISS. When it came time to tour behind their masterpiece, Priest brought Megadeth who were riding high behind their magnum opus Rust In Peace. Opening the show was Testament who had released Souls of Black. Having seen the show, it was a hell of a show. The second leg found Rob Halford and company taking part of a package tour Operation: Rock ‘N’ Roll, which found Priest pairing up with Alice Cooper, with support from Mötorhead, Metal Church and Dangerous Toys. That tour didn’t do particularly well, but it didn’t take away from just how incredible Painkiller was and still is.