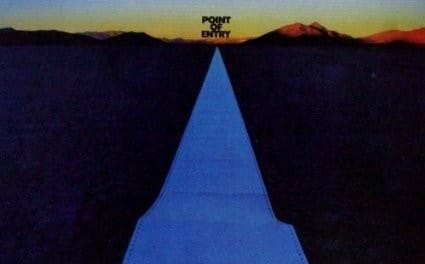 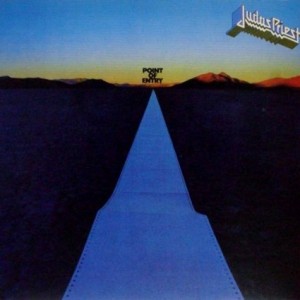 Review:
It’s hard to believe that 35 years have passed since Judas Priest‘s seventh studio album Point Of Entry was released but that is indeed the case. I still remember my younger brother and I being taken to a public library by my mother where we would browse through that library’s vinyl album collection. The albums that caught my attention were the KISS with make-up albums (Love Gun comes to mind) and Judas Priest‘s Point Of Entry. Back in those days, Point Of Entry failed to make much of an impression on me and I never bothered picking it up later in life or even listen to it in full until for the purposes of this review. 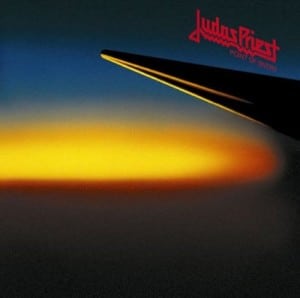 Of course, I have been very familiar in the last 30 years with the three Priest tracks from Point Of Entry that have made their way onto the band’s live set from time to time and onto some of the Priest‘s live discs. I am talking of course of “Heading Out To The Highway”, “Desert Plains” and “Hot Rockin’.” Over the years, I have seen that Point Of Entry has garnered accolades as a “great” album or some people’s favorite Judas Priest album and I simply can’t understand why. They may say “yes” but I say “no” (pun intended). Point Of Entry is one of the worst albums that Judas Priest have ever come up with. I would have considered it one dismal failure of an album if it wasn’t for a few select superior songs such as “Headin’ Out To The Highway” and “Desert Plains” that will always make the album relevant. What is incredible is that Judas Priest were able to follow up Point Of Entry with the absolutely stellar masterpiece known as Screaming For Vengeance.

The thing about Judas Priest is that you never really knew (and you still don’t really know) what the band would do from one studio album to the next. From the brilliant British Steel to the disappointing Point Of Entry to the fantastic Screaming For Vengeance and Defenders Of The Faith to the synthesizer laden Turbo to the heavy Painkiller, Judas Priest have never stayed tied too long to one particular sound. Even in recent years, Judas Priest have varied their sound from Angel Of Retribution to the experimental Nostradamus to the return to form Redeemer Of Souls. If anything, Judas Priest are a prime example of a band that takes risks with studio albums, which sometimes pays off in a big way and sometimes just misses the mark. Point Of Entry quite simply misses the mark. With Judas Priest having experienced some commercial success with tracks such as “Breaking The Law” and “Living After Midnight” on British Steel, they obviously tried to write more in that vain producing shorter songs but instead delivering an inconsistent album with more duds than actual good songs.

Revisiting Point Of Entry more than 30 years since I last heard it in its entirety confirms what I have thought for all these years. This is one weak Judas Priest album. From the sometimes puzzling choice of singles (why wasn’t “Desert Plains” chosen?), awful videos (take a look at “Don’t Go” — enough said!) and terrible songs (in particular “You Say Yes” with its dismal chorus), it seems that Judas Priest took so many missteps with Point Of Entry. Tracks such as “Turning Circles” are puzzling and sees Halford singing what sounds like “tada tada” throughout the song. Sure Halford singing and screams around that era will always be impressive but how could the mighty metal “God” fall this low? “Don’t Go” might have a catchy chorus but the verses are rather boring and viewing the video for that song must make Halford and company cringe every time they see it. “All The Way” sees Judas Priest selling out in a big way with a blatant attempt at trying to achieve commercial success. Aside from the big three (“Heading Out To The Highway”, “Desert Plains” and “Hot Rockin'”), the one song that I like quite a bit on Point Of Entry is “Troubleshooter.” Another song which is quite good is “Thunder Road” but that one only surfaced as a bonus track on the 2001 reissue version of the album and from what I understand may not be representative of the Point Of Entry era.

At the end of the day, if Point Of Entry was what Judas Priest needed to come up with arguably their two best albums  — Screaming For Vengeance and Defenders Of The Faith — so be it. The Point Of Entry album did produce a few stellar Priest classics and that is more that can be said for the songs on Judas Priest‘s last five studio albums.