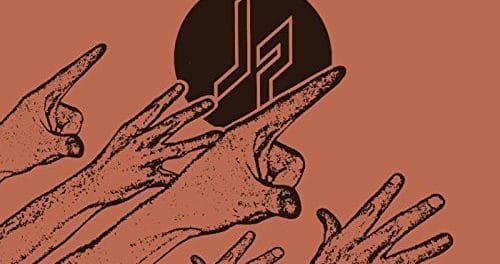 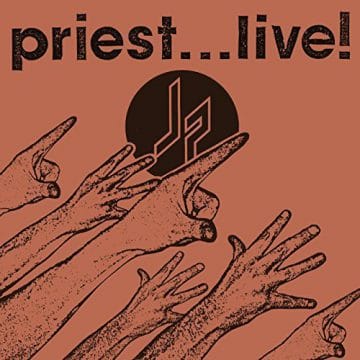 Review:
It was the tail end of 1979 when I was first introduced to Judas Priest. My then 13-year-old self at the time strolling through a German mall with an arm full of 1979’s top rock records. Never mind that in my possession were albums by AC/DC (Highway To Hell – still my favorite AC/DC release), and Rainbow (Down To Earth – my favorite Rainbow album), as well as Ted Nugent’s State Of Shock, Lovedrive by the Scorpions, and Van Halen II, I just about dropped them all when out of the corner of my eye, I caught a glimpse of what for me at that moment was the most bad ass album cover ever.

Featuring the leather clad figure of Rob Halford, arm defiantly raised in front of a back drop of lights, smoke, and the rest of the band underlined with Japanese characters, Unleashed In The East first drew me in like most albums during that time — with an impactful record jacket. Throw in the band’s jagged logo and a back cover photo of Halford on his motorcycle and I was beyond hooked. Once I got home and put it on the turntable and realized that it was live, I was sucked in for good. At the time, I lived in awe of what I considered the holy trinity of live rock albums (anyone who even thinks Frampton Comes Alive at this point should just stop reading) in KISS‘ Alive!, Ted Nugent’s Double Live Gonzo, and Cheap Trick‘s At Budokan so anything live, fast, and ferocious was sure to impress. Nearly two months later, I would get to see Priest for the first time in concert and within the next few months, graduate to studio albums Hell Bent For Leather and their worldwide breakthrough British Steel.

By the mid-’80s, my allegiance to Priest only continued to grow through concerts and the albums Point Of Entry, Screaming For Vengeance, Defenders Of The Faith, and Turbo. But while I continued to dig the music, along the way it seemed to be that it was  missing a bit of the edge that made the hair stand up on my arms. Catching them live in Atlanta in mid-1986 caused me to conclude that it was the studio presentation of Defenders and Turbo, and not necessarily the songs. Taken away from the slickness of the studio, Priest songs continued to be face melting in concert and I can still remember telling my friend afterwards “Man, Priest need to put out another live album.”

Lo and behold, a few months later the band put out Priest…Live!, a double live album featuring tracks recorded on the Fuel For Life tour the previous year in Dallas and the show I attended in Atlanta. Not only did this new release deliver a renewed energy for recently released Priest songs, it provided a perfect bookend to the next part of the Priest tale. Where Unleashed In The East provided a brutal live picture of the band up through Hell Bent for Leather, the 1987 release Priest…Live stands as a lethal representation of Priest from British Steel through Turbo. While it’s true that in concert, ’70s era Judas Priest was still present via songs such as “Victim Of Changes” and “Hell Bent For Leather”, the content on Priest…Live! sticks to the bands’ ’80s output to that point and as well it should have. Why try and top Unleashed In The East when you’d have a better chance of just building on it?

As far as classic tracks are concerned though, Priest…Live! is loaded with them. From radio staples “Heading Out To The Highway,” “Breaking The Law,” “You’ve Got Another Thing Comin’,” and “Living After Midnight” to more recent tracks like “Freewheel Burning” and “Turbo Lover” to just brutal classic Priest metal tracks like “Metal Gods,” Judas Priest covered all of their ’80s bases. With so many great songs, it’s no wonder the band had such devout fans as depicted in the cult classic Heavy Metal Parking Lot, which was also filmed during the tour that tracks from Priest…Live! were taken.

Now while these days, fans can enjoy expanded editions of this great live release, to get the full grasp of the power of Judas Priest live in 1986, explore the video rendition featuring footage entirely filmed at the Dallas concert. In addition to the great album tracks, it also features non-album tunes “Locked In,” “Desert Plains,” “The Green Manalishi (With The Two-Pronged Crown)” and “Hell Bent for Leather.”

More than likely, fans will always debate whether Unleashed In The East or Priest…Live! is the better of Judas Priest’s two top live albums and in just about either case, they’d be right. To this day, both albums properly represent an incredible time in not only the history of Judas Priest, but the history of heavy metal. After all, despite the many live hard rock albums released over the years, how many have stood the test of time like Priest’s first two live platters? Off the top of my head, maybe Iron Maiden’s Live After Death? Thin Lizzy’s Live & Dangerous? Maybe Saxon’s The Eagle Has Landed? The point is that Judas Priest and “live” go hand in hand. Old school blood, sweat, tears, dirt…the whole stinky metal concert experience. So my advice? On the anniversary of this album, pull out a copy of Priest…Live! (preferably on vinyl), and put it on, crank it up, and get crazy.

Judas Priest‘s “Out In The Cold” video (live from the ‘Fuel For Life’ Tour):

‘Out In The Cold’ as featured on Turbo 30, the special 30th anniversary re-issue.Get Turbo 30: http://smarturl.it/Turbo30RT?iqid=vevo About the album:Origina…