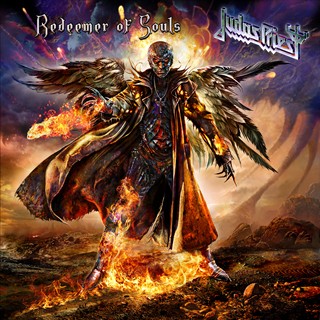 Review:
It is always great to get one more studio album from one of heavy metal’s true greats — may it be the classic Black Sabbath with Ozzy Osbourne on vocals, the mighty Iron Maiden, or in this case Judas Priest. With ‘Metal God’ Rob Halford at the helm, the Priest is back and they do it in style with Redeemer Of Souls.

The one thing that sets Judas Priest apart from many of their peers is that they have, for the most part, put out several different sounding records while keeping the Priest stamp on their songs — which is not always an easy task. From Point Of Entry to Screaming for Vengeance, from Defenders Of The Faith to Turbo, and from Angel Of Retribution to Nostradamus, Judas Priest are not afraid to change it up and take some risks. Given that Judas Priest were kind enough to provide a glimpse into some of the songs that would be included on Redeemer Of Souls prior to its release, including the title track and “March Of The Damned”, one thing seemed certain — they had gone back to their old-school metal sound and ditched all of the experimentation so prominent on their previous record, the concept based Nostradamus.

Redeemer Of Souls is a very good record — the guitars sound amazing, ferocious, and contain a heaviness only Judas Priest can deliver. Halford sounds better than he has in quite some time — sure, there are not as many screams as back in his heyday but he still pulls off a few impressive ones from time to time (especially on “Battle Cry”). For the most part, he seems to settle into a certain octave range on a lot of the songs here — in any case, he still sounds really good and much better than on his recent rendition of “Man On The Silver Mountain” for the Ronnie James Dio: This Is Your Life tribute album.

Although Judas Priest have offered thirteen tracks on Redeemer Of Souls, plus five more on the deluxe edition bonus disc, all of them are good — which is a testament to the band for providing a consistent strong batch of new songs. I even like the ballads that close each disc — “Beginning Of The End” and “Never Forget”, the latter which could potentially provide poignant moments on stage if played live. This is easily the best Judas Priest record since Glenn Tipton, Ian Hill and Scott Travis reunited with Halford over a decade ago. This is also the first Priest studio album not to feature guitarist K.K. Downing, but newcomer Richie Faulkner fills in admirably — frankly, the band do not seem to miss a beat without Downing.

The one small knock on Redeemer Of Souls is that there is no real standout track such as a “Victim Of Changes”, “Painkiller” or “You’ve Got Another Thing Comin'”. If you have the opportunity, I highly recommend that you pick up the deluxe version of the CD because the bonus disc contains some of the best tracks including the upbeat “Snakebite”, which reminds me of material found on Halford‘s last solo album Halford IV: Made Of Metal, the very good “Tears Of Blood”, the easy to sing along to “Bring It On” and the beautiful ballad “Never Forget”. Truth be told, I have listened to the bonus disc more than the main Redeemer Of Souls album. We might have to wait a little longer each time for Judas Priest to release new studio records, but the wait was worth it for Redeemer Of Souls.

Review:
Right off the bat, let me tell you what I think of Judas Priest‘s post Painkiller releases just so you know where I’m coming from. I liked Jugulator and Demolition, although I acknowledge the fact that they weren’t exactly canon, while Angel of Retribution was very good but seemed rushed. And Nostradamus? Not so much, I didn’t really care for that one. Now that we have that out of the way, let’s get down to business here. When I heard that Judas Priest were going to release another album I was excited to hear it — and I was also optimistic because I knew that Priest wasn’t going to call it a career with Nostradamus being the last album that they put out.

What I wasn’t expecting was a juggernaut of a metal album. Not only is Redeemer of Souls a very worthy successor to Painkiller, in the sense that the music represents the next step in the musical evolution of the band’s style, but is easily the group’s best sounding album… period. It is very well produced and the guitars sound like they were played through a wall of Marshalls — 100 feet tall. The Metal God Rob Halford‘s voice is very powerful, and while Redeemer Of Souls isn’t full of the piercing high notes that Angel Of Retribution and Painkiller contained, he still showcases his vocal range with several very high screams — and we even get to hear him go guttural in one song. To those people who would say anything negative about Halford‘s voice, I would (dis)respectfully tell them to keep listening to their auto-tuned pop heroes that pollute the radio these days. I would rather hear someone real over a singing computer any day, and that goes for music too.

From the first track on Redeemer Of Souls we are treated to the powerful metal riffs, heavy rhythms, and brutal twin leads that Judas Priest is known for. Guitarists Glenn Tipton and newcomer Richie Faulkner are all over the place with their leads, more so than on any other recent album. There are also several anthem type songs on Redeemer Of Souls, such as “Battle Cry”. The bass and drum combo of Scott Travis and Ian Hill is as solid and heavy as ever — and while there are no drum-gasms like in “Painkiller” and “Machine Man”, Travis displays some of his finest drum work here. With this album being the little brother of Painkiller, you’d expect to hear some songs that resemble that album, right? Well, the opening track “Dragonaut” and title track could have been on it — but the entire album really is an evolution.

Redeemer Of Souls also introduces us to a couple new monsters/heroes — “Dragonaut” and “Metalizer”. I wonder how they would match up against the formidable Priest characters “Painkiller” and “Nightcrawler”? There is a SyFy Original Movie there somewhere, I’m sure.

If this is to be the final chapter in Judas Priest music, then I am okay with it — they will go out with a bang. But if they decide to do another album, after hearing this one, I say “bring it on!” As I mentioned before, I liked all of their most recent albums except for one, so go get this one. Whether you are a Judas Priest fan from the beginning, or a newer recruit, Redeemer Of Souls will be sure to make your neck sore from headbanging. I won’t say it’s better than Painkiller, but it’s easily their best since and falls within the top five Priest albums ever.