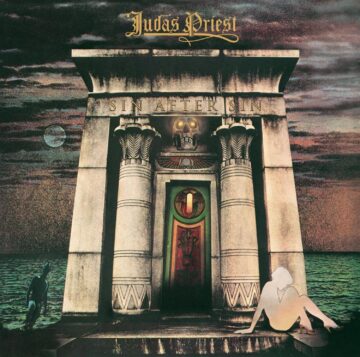 Review:
After his departure from Deep Purple in 1973, bassist Roger Glover ventured into a solo career that also allowed him to jump right into record production. When CBS Records suggested Glover work with newly signed Judas Priest, he already had three Nazareth albums under his belt – Razamanaz, Loud ‘N’ Proud” (1973) and Rampant” (1974) – and had just produced Calling Card (1976), by legendary guitarist Rory Gallagher (1948-1995). After an unpromising start – which included Glover, tired of having his suggestions denied by Priest, leaving for two weeks – the band and producer reached a consensus to make it happen.

The first thing they did was to find a drummer, and in the figure of Simon Phillips, then nineteen years old, they found a guy whose differentials – Phillips was versed in jazz and other musical styles – earned him an invitation to join the group full-time, which he politely declined. With the drums issue resolved for now, the rest flowed beautifully and intensely over the course of a month and a half at Ramport Studios, better known as The Who’s London studio.

On April 8, 1977, Sin After Sin – the title, extracted from a phrase from the lyrics of “Genocide”, a Sad Wings of Destiny (1976) number, aims to dialogue with the opening track, “Sinner” – would hit stores bringing 40 minutes of heavy metal punctuated by two ballads (“Last Rose of Summer” and “Here Come The Tears”) and a cover that not only became a highlight of the live repertoire, but also served as passport for the record to enter the British charts, an unprecedented feat for the band until then. The idea of ​​re-recording “Diamonds And Rust”, by folk singer Joan Baez, came from Glover. It was as if he had come from the future and since more than four decades later, the song would remain one of the highlights of the group’s concerts.

“The true free expression I demand is human rights,” sings Rob Halford in “Raw Deal,” hinting at his homosexuality. “Rock’s worst kept secret,” according to guitarist K.K. Downing in his 2018 autobiography Heavy Duty wouldn’t surface until 1998, but even in the ’70s, the signs were there for anyone who wanted or had the sensitivity to see. “Dissident Aggressor”, later recorded by Slayer, is about the Berlin Wall. “Grand canyons of space and time universal / My mind is subjected, subjected to all,” read the lyrics, a cold analysis of the differences between West and East at the height of the Cold War.

Twenty-third place in the UK charts and a curious 49th position in Sweden showed that the hard work was starting to pay off. After a few opening dates for Status Quo at home, Judas Priest, now with drummer Les Binks on board – another Glover idea for the account – was ready to conquer America. But entry into the US charts would have to wait until the next album, Stained Class, in 1978.