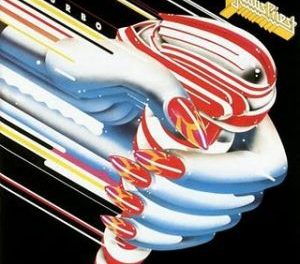 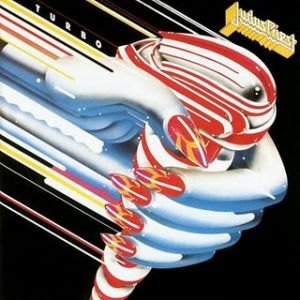 Review:
Priest goes glam? Turbo is the one Judas Priest album where the band members as a whole conceivably crossed that line exchanging their leather and studs for flashy costumes. Why even singer Rob Halford suddenly had long hair again. Just like many heavy metal bands of their era, Judas Priest came up with their most commercial sounding album complete with synthesized guitars which was the sound of the day back then. Today marks the 30th year anniversary of the release of Turbo so this is a good time as any to look back on this album.

Even though Judas Priest definitely “sold out” to commercialism with Turbo, I never considered that album a disappointment compared to how I viewed Mötley Crüe‘s Theatre Of Pain which followed Shout At The Devil and Twisted Sister‘s Come Out And Play which followed Stay Hungry. Turbo was more akin to Iron Maiden‘s Somewhere In Time which was the successor to Powerslave. In that sense, sure Judas Priest were all of sudden playing rather commercial sounding songs with synthesized guitars but I still considered Judas Priest as a heavy metal band, which could not be said for Mötley Crüe nor Twisted Sister. Interestingly, Judas Priest started getting heavier and heavier with their subsequent releases to Turbo. From Turbo to Ram It Down to Painkiller to Jugulator, the Priest just got heavier and heavier.

But back to Turbo… The album  opens with “Turbo Lover” which almost thirty years laster is still a live staple at Judas Priest concerts. Never one of my favorites, I always disliked the slow build up to the track although I must say that the intro portion of the song sounds a lot better live. Arguably the best song on Turbo is “Locked In” which starts off quickly and never lets up. While I have never been a big fan of “Private Property”, I must confess that listening to the song now had me singing along and really enjoying the track. “Parental Guidance” has a great deal of melody and was probably my favorite on the album back in the day. The one song that was just too obvious in its attempt to become an anthem was “Rock You Around The World.” While I have never been a big fan of the song, the twin guitar work by K.K. Downing and Glenn Tipton is something to behold.

The second half of Turbo is arguably better than the first. Perhaps it’s because I am kind of sick of hearing “Turbo Lover.” “Out In The Cold” will always hold a very special memory in my heart since Judas Priest‘s Turbo tour was the first concert that I ever attended and “Out In The Cold” was the opening song for Priest‘s set. Accordingly, that song can do no wrong in my book. “Wild Nights, Hot & Crazy Days” seems so far removed from what Judas Priest would usually sing about but I have always liked it. I love Halford‘s piercing screams during the verses. The weakest part is the chorus but that could be said for many songs on Turbo including “Private Property” and “Rock You All Around The World.” “Hot For Love” is one of the weakest tracks but saved by the portion of the song where Halford sings “Nowhere to run, Nowhere to hide…” Overall, “Reckless” closes off Turbo and has to be one of the most underrated songs in Priest‘s catalogue. It’s just a great song from start to finish.

The 2001 remastered version of Turbo contains two bonus tracks which don’t add a whole lot. “All Fired Up” is the worse song on the album and one wonders why it was included on Turbo when it was apparently recorded during a different era for the band. A live version of “Locked In” is nice but not worth the price of purchasing the remastered version of the album.

Overall, Turbo is one of my favorite Judas Priest albums but part of it has a lot to do that my first concert experience was seeing Judas Priest‘s Turbo tour. The reality is that I didn’t like the album that much going into the concert since I only ended up attending that concert because someone else could not make it and my friend needed to unload the ticket on someone. In any case, Turbo proves that even when selling out playing commercialized hard rock with synthesized guitars and while sporting a rather glam look, Judas Priest are so synonymous with heavy metal that they never lost their identity as a heavy metal band.