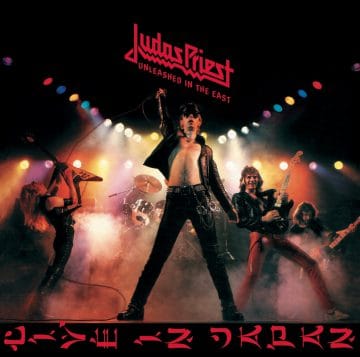 JUDAS PRIEST
UNLEASHED IN THE EAST
Released on September 17, 1979 (Columbia)

Review:
The best Judas Priest release, ever, no debate. But… was it truly live, or was it “Unleashed In The Studio”? Over the years, band members have been a bit cagey, with singer Rob Halford admitting that his vocals were indeed ‘enhanced’ in the studio environment. But… with an album blessed with so much sheer power, ferocity, and absolute Metal brilliance, why split hairs? Pop it in your deck, put on the headphones, and crank it to be transported back to 1979!

I came to Priest a year later, with 1980’s British Steel. I liked what I heard, so started going backwards to explore the band’s earlier catalogue. Like many, I was taken with the cover photos which graced Unleashed In The East, which definitely left no doubt that this was something special. But even this preview did not prepare me for the Metal awesomeness contained in the album’s nine tracks!

Recorded on February 10th and 15th 1979 at Tokyo, Japan’s Kosei Nenkin Hall and Nakano Sun Plaza, the album captures shows on Priest’s Killing Machine (Europe) / Hell Bent For Leather (North America) tour. This was to be the band’s last work with drummer Les Binks; they were a lesser band without him in my humble opinion. Incidentally, the band’s first Canadian show was on this tour, at Toronto’s El Mocambo club on April 24th; I would love to time travel back to that magical night! Unleashed In The East opens with an ominous swell of electric guitar, then the band rip into pre-speed-metal classic “Exciter.” Yes, the Canadian band of the same name obviously were Priest fanatics! I could rave and rant, on and on, about every song on the album… from the short, choppy classic “Running Wild”, through the Victorian inspired “The Ripper”, extended workouts “Sinner” and “Genocide”, and Halford’s piece de resistance, “Victim of Changes”, with his glass-shattering shriek at the end of the song. Priest dust off the Joan Baez song “Diamonds And Rust”, bringing it into Metal territory. My personal favourite is album closer “Tyrant”; a wicked theme riff, and brilliant dueling guitars from one of Metal’s best-ever tandems, Glenn Tipton (in your right ear) and K.K. Downing (in your left)! The guitars of Tipton and Downing never sounded more fierce. And an honourable mention to underrated bassist Ian Hill. The album’s production captures his anchoring bass lines throughout the album.

For those of us who always felt that the album was too short, the initial (and pricey… ask me how I know!) Japanese release contained a ‘bonus’ record with four more songs from the same sessions — “Hellbent For Leather”, “Rock Forever”, “Delivering the Goods” and “Starbreaker.” Happily, the domestic CD version of Unleashed In The East now contains these songs at a much more reasonable price. There is also rare vinyl in existence which contains versions of “Evil Fantasies” and “Beyond The Realms of Death.” It would be cool to package it all up into a double CD!

In closing, I’m either preaching to the converted, or you absolutely have to acquaint yourself with this timeless album. This was one of the formative albums of the NWOBHM / New Wave of British Heavy Metal movement, influencing a whole new generation of Metal musicians. For me, it’s one of those records that always sounds as fresh as the first time you heard it; Priest hit a level of majesty and Metallic power which has certainly stood the test of time!