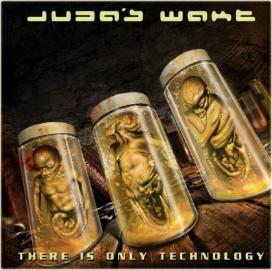 Review:
I’ve been sitting on this CD for awhile, because honestly their bio didn’t sound like something I would like. There Is Only Technology may not be as bad as I had originally imagined but I definitely wouldn’t spend my hard earned money to purchase it.

To me the singer sounds like that guy from the Offspring, but whereas the Offspring use humor to make their music accessible Juda’s Wake simply lumber forward. Their wall of sound just doesn’t offer enough diversity and before long you feel like you are being bludgeoned to death. The guitars grind away endlessly bringing on the feeling of deja vu a minute or so into each song. Where are the guitar solos to shuffle things up a bit? There are none to be found – OK that may be an exaggeration because “Drugs” has a cool solo, but that is only one out of eleven songs!

I’ve always found this type of music to be too depressing to be entertaining and frankly it bores the shit out of me. The guitars go crunch, the backbeat is steady but never changes, and I the listener fall asleep…zzzzzzz. At least the vocalist doesn’t try that mellow verse/scream the chorus crap, so I’ll say the band isn’t as annoying as most of this new breed of “metal”. If you are more open-minded musically then I am you can judge for yourself at www.judaswake.com.