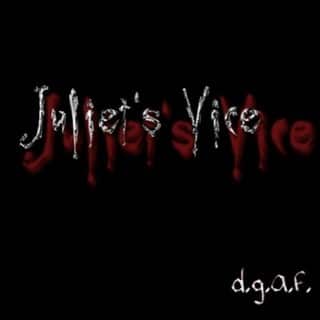 Review:
Prior to receiving d.g.a.f. I knew absolutely nothing about Juliet’s Vice — although the name did illicit thoughts of the ever so tasty Juliette Lewis. I put the band’s newest platter in my player and from the opening note of “Never Gonna Change” I was ass deep in the tastiest, sleaziest hard rock this side of Joe LeSte‘s Beautiful Creatures.

I’ll be damned if these magnificent bastards from Philly didn’t beat me unmercifully about the head and chest with their brand of raw, unadulterated attitude-laden swagger-fueled hard rock throughout the entire d.g.a.f. disc. That’s right, every song is pitch perfect — there is no filler here… NONE! The rhythm section switch between this CD and the band’s 2009 debut Decadence & Romance must have given Juliet’s Vice the kick they needed because the haunting “Subliminal Seduction”, the sleazy “Lost Little Angel” and the guitar riff in the title track are all great.

If you’re looking for bands to compare Juliet’s Vice with, my take was/is Bang Tango meets New American Shame. There are obviously heavy nods to early (emphasis on EARLY) Guns N’ Roses, L.A. Guns and Motley Crue, but I also hear and feel a heavy dose, especially in the attitude and musicianship, to Warrior Soul (think “Punk And Belligerent”). The band itself has a pretty good pedigree already, playing in some fairly well known bands, but I won’t drop names today, just do a quick search and you’ll see that they’ve earned their stripes and certainly deserve a little appreciation for their efforts and contributions to the sleaze rock genre.