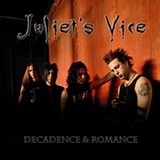 Review:
I was all ready to give Juliet’s Vice shit if they didn’t take my advice and released more songs with crappy production. I am happy to say that they listened to me (or maybe it was coincidence, does anyone actually listen to me?!) and fixed the production on Decadence & Romance, the band’s full-length debut. I don’t hear much in the way of romance on this CD though, but the word decadence is fitting.

The improved sound quality breathes new life into songs like “Lovin’ Comes Easy”, “Rock ‘N Roll Party” and especially “I Can’t Take It” which sounds much better. As for the new songs, while the band still sounds a bit amateurish, like a DIY punk band without the punk annoyance, I find myself liking most of them. “Gimme A Reason” for example has a slight Throbs vibe about it, although is likely faster than anything they put to disc. “I Can’t Take It” on the other hand is filled with a mesmerizing bass beat and some great guitar work, in fact the guitars shine on many of these tracks. Juliet’s Vice isn’t afraid to splatter each song with guitar riffs, leads and solos – that’s the way all rock music should be.

Not everything works though, “Tear Down The Walls” never seems to get going and just sort of plods along while the chorus to “Jaded” is a touch annoying. Speaking of annoying, I know some people aren’t going to like the vocals. Even though there are two lead singers they have similar qualities, both of which I personally like, but they aren’t the most accessible voices around.

I like these guys, and feel they are on the right track. Consisting of members from the Philadelphia underground Juliet’s Vice are definitely sleazy (I’ll even give them decadent) and fit outside the mainstream – which isn’t such a bad place to be.