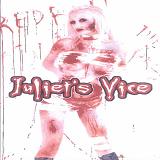 Review:
Philadelphia’s Juliet’s Vice already know that I like their music, however this EP sounds a little rushed to my ears. The songs are here, but sadly the production isn’t. I have a feeling that the band was so eager to get some music out that they didn’t worry as much about the sound quality as they should have.

That’s ok (this time), I can overlook the poor production here and just concentrate on the music itself – seeing as this is just a demo EP and I’m sure when an official full-length arrives everything will be tweaked. As for the band itself, Juliet’s Vice is made up of members from groups such as Primadonnaz, Midnight Angel, American Sugar Bitch, and The Scream Clan (all of which have been reviewed on this site). In other words, Juliet’s Vice is like a ‘best of’ of the Philadelphia bar scene.

What I like about Juliet’s Vice is their raw sound, plus the guys have two lead singers which mix things up a bit even though both guys have a sleazy snarl. They are the type of band whose sound reminds you of other groups, yet you can’t exactly pinpoint who. “Bitch” and “Lovin’ Comes Easy” are cool rock tunes and the best of the four represented here, both of them are drenched with memorable grooves. And the best part of all this is that Juliet’s Vice has even more songs of a similar style waiting to be unleashed.

As an introductive teaser this EP does the job, but the guys better fix the sound quality when they decide to give us a proper album – because expectations are going to be high!