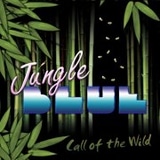 Review:
I don’t recall entering a time-machine, but apparently I did. Or at least that’s how it seems, listening to the debut album from Jungle Blue. The band sound like they picked up right where the Sunset Strip scene ended without missing a beat, which isn’t surprising considering the tracks on this disc were recorded in the early 90s after vocalist Matt Harris returned home from chasing his dream in Los Angeles.

This 5-piece outfit, who actually hail from Tulsa, Oklahoma, were undoubtedly influenced and a part of the hair-metal scene (minus the Aqua-Net and Maybelline). Call Of The Wild rocks hard, but at the same time keeps that infectious pop-groove of yesteryear. Think of Warrant or Trixter, and you’ll know what I mean.

Hidden under all the great harmonizing and catchier than hell choruses, there is some very impressive playing. The rhythm section drives home a melodic undertone, while the Van Halen-inspired guitar work simply dazzles. Knowing what to do, and when to do it, this style of playing never overshadows any of the tracks.

Unfortunately, I can’t pick out any one track that stands out above the rest. That is a bit of scrutinizing, granted, but the band gets into such a feel-good vibe, that carries thru every track, that it all begins to sound the same mid-way through. The problem with some of these artists is that they don’t really strive for their own original sound and Jungle Blue is no exception.

There isn’t a bad track here, but it sounds all so familiar. That isn’t a bad thing really, it’s just that something that would make this band stand out from the rest would have been nice. The bottom line, regardless, is that Call Of The Wild is a very fun CD and, after all, that’s all that really matters. Once you feel the groove, it will be easy to overlook any shortcomings. Pop this CD on and expect yourself to be humming any one of these 12-tracks in your sleep.