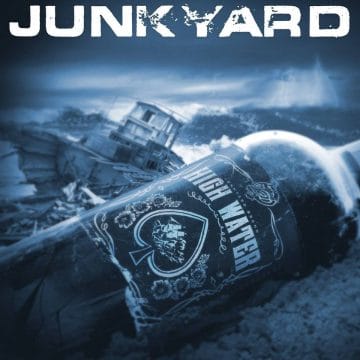 Review:
The somewhat revamped Junkyard are back with a new album titled High Water. The 2017 Junkyard are far different from the Junkyard that issued the self-titled album in ’89 or their Sixes, Sevens and Nines album in ’91 for that matter. The ‘classic’ line-up is no more; the holdovers from the ‘glory days’ are vocalist David Roach and drummer Patrick Muzingo. Junkyard have overhauled their sound. It’s not as sleazy as the ’89 model. Joining the aforementioned are bassist Todd Muscat, who joined the band in the early ’90s, guitarist Tim Mosher and guitarist Brian Baker. Baker, as you likely know, was part of the classic line-up. He participated in the making of High Water but is unable to tour consistently with the band. The current incarnation of Junkyard has more in common with a band like Social Distortion than the Junkyard that we grew up listening to.

High Water isn’t a groundbreaking record by any means. It is however an eclectic collection of well crafted punk, country rock and hard rock tunes. In my opinion, the strongest tracks on High Water are as far removed from one another as you can get. “Styrofoam Cup” finds Junkyard switching gears and delivering a bluesy and twangy rock effort that will have you tapping along with the beat. Roach’s gravely, pitchy and weathered vocals make “Styrofoam Cup” a bonafide ‘deep hit.’ It’s probably the best song on the record. The fast paced, gritty and punk influenced “We Fuck Like We Fight” or “W.F.L.W.F” as listed on the album is another fine moment on High Water. While the title and the chorus might be juvenile at best, it works wonderfully and the chorus is truly unforgettable. The next is “Don’t Give A Damn” which is a full fledged melodic ‘cow-punk’ effort. Years ago, Roach made mention that Junkyard was a cross between something or another meets George Jones and that hasn’t been more evident than on High Water.

If you’re looking for something a little bit off center from a familiar name and if you proceed with an open mind, you might find the hidden gem of 2017 in High Water.