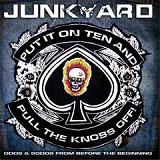 JUNKYARD
PUT IT ON TEN AND PULL THE KNOBS OFF!
Released 2008 (Anyone Music)

Review:
Junkyard‘s newest release is billed as ‘odds & sodds from before the beginning’. In other words it is a collection of early demos from 1987, songs that helped the band land their major label recording contract. Personally I’ve always enjoyed Junkyard‘s unique brand of southern sleaze, and even if the majority of these demos don’t differ much from what appeared on their self-titled debut, it is still interesting to hear the band in its infancy.

I’m not convinced every song on Put It On Ten is actually from 1987 though. Every song from the 1989 debut is included, but what about “Misery Loves Company” and “Lost In The City” from 1991’s Seven, Sixes & Nines? Maybe they sat in the vaults a few years, but songs such as “Take Me Home”, “Can’t Pin That On Me” and “Hallelujah, I Love Her So” are all suspect seeing as the were released much later in the band’s career.

None of that really matters though, it’s always about the music and for twenty year old demos these songs sound damn good. The sound of the disc is recorded pretty low (compared to newer CDs), but that is a minor complaint which is quickly fixed by twisting the volume knob on your stereo.

The less known tracks on this CD, the ones that may attract more than just the hardcore fans and completists, are hit and miss. “Ain’t Dead Yet”, which was previously released as a Choreboy (a Chris Gates band) song, is a crunchy tune with a killer beat and fits Junkyard‘s vibe perfectly. The cover of “Riot In Cell Block #9” kicks all sorts of ass as well. On the other end of the spectrum is “Mississippi Queen”, a good song that sounds kinda uninspired here and “One Of The Boys” which I don’t care for much at all.