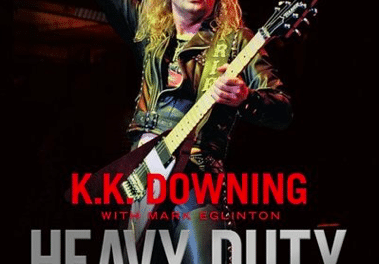 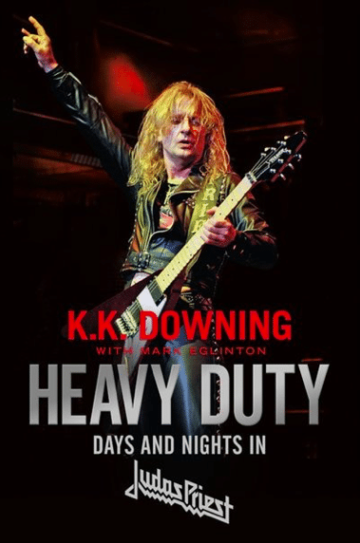 Review:
My original intention was to read and review Judas Priest frontman Rob Halford‘s autobiography Confess but the reality is that I have not been able, or at least motivated, to get past page 70 or so from that book. On the other hand, I picked up K.K. Downing‘s autobiography Heavy Duty: Days And Nights In Judas Priest during this past summer and I was able, and motivated to, finish reading that book within a few months. I basically would read 10 to 20 pages during some lunch hours on sporadic weekdays. Both autobiographies cover two of the main most recognizable Judas Priest members’ lives but Downing‘s book was a much easier and compelling read for one main reason. I don’t think that I am homophobic in any way but Halford‘s sexuality / self-discovery is all over his autobiography — or at least for those first 70 pages that I have consumed so far….

Just like I don’t really care to read about Gene Simmons‘ various women conquests or even those of Tuff frontman Stevie Rachelle‘s in his Tuff Diaries instalments that are published on his Metal Sludge website, I have little interest in Halford‘s self-discovery that he is gay rather than heterosexual. I totally get that Halford‘s sexuality was a huge part of his life — and which is likely even to this day — just like fucking women was a huge part of Simmons and Rachelle‘s rock star lives but those topics get old fast. As a music fan, I want to read first and foremost about the bands that I like or love, the inner issues within those bands and how some of the greatest music in the world came to be. From that sense, Downing along with his co-author Mark Eglinton deliver with Heavy Duty: Days And Nights In Judas Priest albeit at a somewhat very fast pace. Yes, Downing doesn’t shy away from letting the reader know that he more than indulged in the rock n’ roll lifestyle and particularly women but you don’t get all the gory details over and over again.

Instead, Downing focuses mainly on his time in Judas Priest and some of the issues that he’s had to endure during his time in the band. In a way, it’s a shame to read about this in Downing‘s book because it seems that he bit his tongue for many years — perhaps decades — with respect to his various issues with guitarist Glenn Tipton and rather than address them, he quit the band only to want back in once Tipton could no longer tour due to his worsening Parkinson’s Disease issues. Sadly, Downing‘s autobiography Heavy Duty rips into Tipton time and time again from complaints about Tipton hogging the guitar solos to Tipton causing the band to miss out on many festival opportunities by refusing to tour during the summers so that he could spend time with his family.

By the time that Downing finally quits Judas Priest in 2011 — he was going to quit about 20 years earlier but Halford beat him to it — the guitarist admits that he told Tipton that he hated him or something to that effect since 1985. That’s a long time to resent someone and I can totally see why Tipton — who definitely emerges as the de facto band leader — does not want Downing to come back into the band. If anything, Heavy Duty provides all you need to know why Downing hasn’t been able to get back in the Judas Priest line-up in the last few years despite his very public pleas / attempts in that regard.  It is hard to feel sorry for Downing since he could have addressed his various grievances with Tipton on many occasions but the former kept quiet and bit his tongue for years and years before unleashing on the latter in Heavy Duty and I suppose earlier on in one of his subsequent resignation letters to the band. It is all kind of sad to read as perhaps a little band counselling like Metallica went through during their Some Kind of Monster stage could have done wonders to heal the fractured relationship between the two guitarists.

Putting aside the constant mainly silent grievances from Downing towards Tipton, the former tends to speed through various chapters in the band’s career at an astonishing pace. Certain albums are seemingly only given a few pages of coverage and sometimes, Downing just picks a certain event such as a tour or encounter to cover a specific album’s time period. Downing does admit not remembering why certain decisions were made such as the choice of a producer early on, which suggests to me that he was more of a follower than a leader in the group. Perhaps the most surprising revelation to me is how much praise that Downing bestows to arguably one of the worse Judas Priest albums out there — 2008’s Nostradamus. I can’t even imagine the mighty Priest playing that album from beginning to end in a live setting. That would have been one long evening yet Downing still seems to believe that a major opportunity was missed in that regard. It is kind of like if Gene Simmons and Paul Stanley were lamenting in their respective autobiographies that had KISS toured behind Music From The Elder, that album would have taken off…. Yeah, right.

Overall, Downing‘s autobiography Heavy Duty: Days And Nights In Judas Priest was a fun and easy read although I wish that the guitarist would have spent more time on each album. I suppose that it would have made for a longer book but I think that it would have been worthwhile to do so. One observation from Downing that I found quite interesting was that the guitarist opined that Judas Priest didn’t live up to its potential in that the group achieved a great reputation as one of the elite heavy metal bands but the album sales never really followed with Screaming For Vengeance still representing the pinnacle of the band’s success in record sales with “only” 2.5 million copies sold. I have to say that this was an accurate representation of how I see Judas Priest as well.