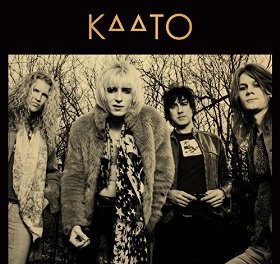 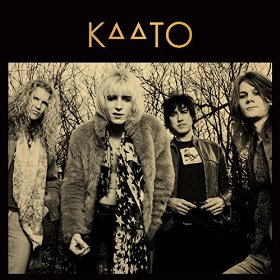 Review:
KAATO are a brand spankin’ new band from Sydney, Australia by way of Nashville, Tennessee, USA. Their self-titled debut brings together talent from both continents for a well-produced and rocking album. Singer Kurt Lowney (a relative puppy at age 21) began recording in Nashville with producer Mitch Malloy, who has become an integral part of the band. Joined by Mika Nuutinan and Tristan Avakian, the band’s media kit claims KAATO are “…a mixture of Aerosmith, Boston, Styx and Zeppelin, and all the stuff that just makes you want to get up and dance.”

To be honest, I ran across KAATO by accident. Their new single “High Time” popped up on my YouTube feed, so I gave it a shot.  Even before the song was over, I was contacting Lowney for more information about the band.  As he told me, he’s “been dying to release this for months”, and I can see why.  Sitting on it was doing no one a favour!  There is much to explore on this album.  There are elements of blues, funk, and sleaze, all mashed up into one great mix.

Tracks like “SDRnR” (“Sex, Drugs, and Rock & Roll”) or “Time Stands Still” have a bit of the southern rock twang like the Black Crowes had, or more recently Devil City Angels. Whereas “It’s All Happening Now” or “I Don’t Love You” are darker and heavier. Strains of early Def Leppard in fact. I’m generally not a fan of ballads, but I can hear significant emotion coming through in the vocals and guitar playing on “Like a Blade.”  It reminds me of how Aerosmith used to do it.

The single “High Time” really tells the story of KAATO. It’s a high energy track with a solid guitar line. I guess my only complaint is that Lowney might want to explore lower registers at times, as I find his vocals sometimes to be a little over the top, especially in the choruses. I do like the funky ode to the USA “Only A Day Away” with the lyrics “…The Jack and Coke, four bucks to smoke, any possibility…”  It’s good fun, just like the rockin “You Lose” with its killer slide guitar and wild rhythm section.  “Colder” starts much like classic 70s rock bands but gets new and fresh quickly.

I really liked listening to KAATO. I’m on my fifth run through already, and have only had it for several hours. I mentioned Devil City Angels, and that’s the closest comparison I can make. Perhaps a bit of Black Crowes meets Little Caesar. This is a good time album with the swagger to lighten up any party mix. Give it a chance!