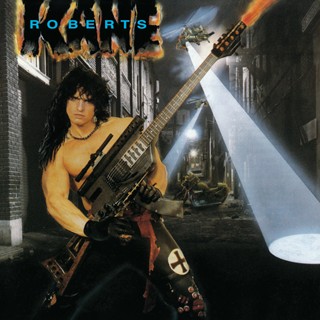 Review:
Only during the outrageous ’80s could a creature such as Kane Roberts have been spawned. With equal amounts of Hercules and Rambo, the circus-sideshow guitarist helped launch the comeback of Alice Cooper — taking the shock-rocker’s music into full blown heavy metal territory. During this time Roberts tried his hand at a solo career and on his 1987 debut he threw every conceivable cliche against the wall — or through the wall as his physique at the time would indicate — to see what would stick.

With a machinegun guitar in hand, and pecs the size of a small village, Kane Roberts was a spectacle to behold — but behind the outrageous appearance was a talented musician waiting to emerge. And while it wouldn’t be until 1991’s Saints & Sinners album that Roberts‘ abilities would truly shine, his laughable self-titled debut wasn’t a complete failure.

How can you not love ridiculous lyrics such as “6 and 9 and you’ve got bingo” — courtesy of the opening “Rock Doll”? This eleven track effort is filled with such head-shaking gems, and often you can’t help but laugh out loud. But if you look past the lyrics and the visuals (if bassist Steve Steele put any more oil on his torso he’d be in danger of drowning) and accept the fact that it was the mid ’80s, when decadence ruled the day, you’ll stumble upon a couple of memorable songs. “Women On The Edge Of Love” hints at the type of music Roberts would later pursue, “Triple X” is standard ’80s metal fare, “Outlaw” has a certain KISS quality about it, and the Kip Winger co-penned “A Strong Arm Needs A Stronger Heart” succeeds with its catchy chorus.

I wonder what Kane Roberts thinks of this album as he looks back upon it — does he shake his head in embarrassment or admire it and the era it was born out of? It’s completely over-the-top and campy compared to today’s standards — and probably even was in the ’80s — and is the type of effort people would use the ‘I was young and stupid’ excuse to describe. Of course the pinnacle of Kane Roberts‘ career was still a few years away, but there is a certain B-movie charm about this album. And I can’t help laughing at the instrumental called “Gorilla”, played by a guy the size of a ‘silverback’ — only with more hair on his head and less on his body.