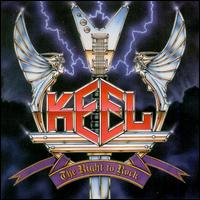 Review:
The Right To Rock is the major label debut album from this rocking quintet. Songs like the classic anthem “The Right To Rock”, “Back To The City”, “Get Down” and “Easier Said Than Done” (two versions of this song appear on the CD) really kick ass! Also included is a cool version of the Rolling Stones‘ “Let’s Spend The Night Together”.

The sound here is melodic hard rock along the lines of bands like Helix. Kiss‘ Gene Simmons liked Keel so much that he agreed to produce this album. These guys sounded killer and deserved more recognition; they were always on the verge of breaking out but never seemed to make it. I’ve had the vinyl release for years now and felt this album was worthy of upgrading to CD. I give The Right To Rock two thumbs up, it kicks ass!