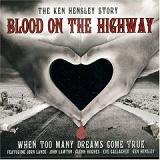 Review:
Step into the mind and life of the legendary Ken Hensley!

Blood On The Highway is Ken Hensley‘s story, a musical biography if you will. The disc follows a young boy’s dream of becoming a rock star, his dreams becoming reality, followed by his fall from grace and finally acceptance of how his career has unfolded. It makes for an excellent concept as that boy is Ken Hensley, who propelled to stardom with The Gods and Uriah Heep only to find his career fizzle in the 80s and then get shaken to the core with the death of a couple of former bandmates.

Helping bring this epic to life are vocalists Glenn Hughes, John Lawton and Jorn Lande (who almost steals the show!). Blood On The Highway is a varied release, with some songs working well and others falling flat, but each represents a piece of the puzzle and in ways mimic Hensley‘s ‘up-and-down’ career in music.

In my opinion the best songs on this release are the ones fronted by David Coverdale sound-a-like Jorn Lande, because they are the ones that rock the hardest. Each song that he sings are great slabs of melodic rock with big memorable choruses, and “Okay (This House Is Down)” could easily be a Whitesnake show stealer. The rest of the songs don’t reach the intensity of the five sung by Lande, but Hensley himself sings the heart-warming ballad “I Did It All”, a song that could single-handedly sum up this entire album.

This in an ambitious effort, even the gatefold artwork harkens back to the days of exciting vinyl artwork concepts. But what I like most about Blood On The Highway is the honesty contained within. Ken Hensley hasn’t tried to place blame for his failures or sugarcoat his lifestyle. He has told his story truthfully and without regret, and as he sings “I did it all and now at last, I’m doing fine”. It may have been a hard journey, but I’m glad he invited listeners to take this trip with him.