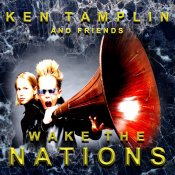 KEN TAMPLIN AND FRIENDS
WAKE THE NATIONS
Released 2003 (Now & Then)

Review:
Eighteen songs, and approximately one hundred guitar solos…Christian rocker Ken Tamplin
has unleashed an incredible guitar album. For those of you who saw Christian and were
tempted to stop reading, don’t worry; Tamplin doesn’t come across as preachy,
unless you consider delivering great songs a form of preaching!!

Wake The Nations kicks off with the discs best song, “The Story Of Love,”
and its irresistible sing-a-long chorus. The album reminds one of the harmonic deliveries of
a band such as Harem Scarem, with its near perfect delivery. Its been acknowledged
that Tamplin is a perfectionist in the studio, and it shows here, not a single note is
out of place.

Other standout tracks include “Wake The Nations”, the slow and meandering
“God In Heaven”, the Whitesnake-like “Mystery” and “Livin’ Large” (which sounds
like it would feel at home on a Kim Mitchell album). Guitar virtuosos such as
Stevie Salas, Reb Beach, Marty Friedman and Doug Aldrich are
all allowed to put their own stamp on the songs, but without being distracting. Of course
with eighteen songs, some aren’t going to be up to par, but there is enough here to make
Wake The Nations a great melodic/harmonic album. More information
can be found at kentamplin.com.