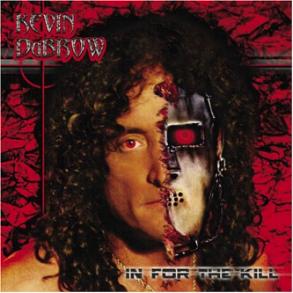 KEVIN DUBROW
IN FOR THE KILL
Released in 2004 (Shrapnel)

Review:
Cover albums are usually hit and miss, and comparing the remakes to the originals never seems to work. On one hand I prefer covers that stay true to the originals, but there also has to be enough differences to make the new recording worthwhile – it is a hard line to follow. Former Quiet Riot (a band renowned for their excellent covers) vocalist Kevin DuBrow‘s first solo release is a collection of remakes paying tribute to his 1970s idols, with some obscure and well-known songs.

Even though In For The Kill is a solo album, the remaining musicians play so well that it feels like a band effort. In fact, relatively unknown guitarist Kevin Curry starts shredding on the opening track “Born On The Flame” and never lets up. “Red Light Mama, Red Hot” and “Drivin’ Sister” are both cool numbers that swagger from start to finish. I wasn’t sure if DuBrow could handle Nazareth‘s “Razamanaz”, but he does a great job. In fact the original song has vocals that are very close to falling apart at the seams, and Kevin has captured that here.

Kevin impresses me most of The Faces‘s “Stay With Me”. His vocals are gritty enough to pull off Rod Stewart‘s delivery while the slide guitar and Michael Lardie‘s (best known for his work with Great White) piano polishes off the song nicely. Just like every covers album, not everything here works – could anyone actually top the original “Speed King”? When Kevin DuBrow tackles a gritty song he nails it, but sounds strained on some of the smoother numbers. All-in-all In For The Kill is a commendable tribute to some of rocks finest, so in that respect the album is a success. The album can be found at shrapnelrecords.com.

Reviewed by Skid for Sleaze Roxx, May 2004