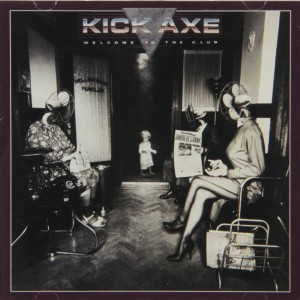 Thirty years ago, I didn’t know much about hard rock. I didn’t have an older brother or anyone to show me what was cool, and I had no budget to buy records. MuchMusic’s Power Hour scared me. Small town Northern Ontario (in Canada) was great if you liked Top 40, so nice people had to donate their albums to me. Along with Helix, one of the first metal bands I was exposed to was Kick Axe. I was given Vices and Welcome To The Club at the same time. Two very different angles on one genre. I do think the Vices album cover is one of the cooler images out there.

Along with Helix, the Killer Dwarfs, and Anvil, Kick Axe were at the vanguard of popular Canadian metal, such as it was at that time. Not many in this country were doing it, but boy, they were doing it well. This album rocked me — hard. I am not ashamed to say that I spent many a Saturday afternoon in my room with a cardboard guitar jamming along. The production alone is a treat. Recorded at Spencer Proffer’s Pasha Music House in Hollywood, the band from Regina, Saskatchewan put together a solid outing.

Sure the gurgling baby noises after “Feels Good – Don’t Stop” are a little strange, but followed up with “Make Your Move” cleanses the palate. The stomp rhythm is infectious and the lyrics are encouraging… “The joke’s on you if you try to hide from the truth, your number is up, all eyes on you, Make Your Move.” Next up is “Never Let Go” which is a moody song, a gentle ballad that would have fit on Vices. “Hellraiser“ too, would have worked on Vices, and the point is Welcome To The Club is a logical progression from the earlier spiked arm-band driven power rock. Not only did the writing and production improve, but so did George Christon’s vocals, and the dual guitar riffs of Raymond Harvey and Larry Gillstrom.

The two outstanding cuts to me are “Too Loud… Too Old” and “Feel The Power.” “Too Loud… Too Old” is an anthem to all the kids like me whose parents hated the volume and the metal but put up with it anyway. “Feel The Power” starts with a live riff and crowd noise. Not a live track, but you feel the arena rock feel the band has. “I feel my blood surge, I feel my primal urge, I feel the power!” It was that kind of fist in the air sound that got me hooked on wanting to play live someday.

Finally, the album ends with what some consider to be a throwaway song, while others love it. Kick Axe do a decent cover of The Beatles‘ “With A Little Help from My Friends.” On its own, it’s average. But you toss in the likes of Rik Emmett (Triumph), Andy Curran (Coney Hatch) and the great Lee Aaron, and it becomes something more. There’s a lot of feeling and love in this song. I have grown into it over the years. Some of you who remember MuchMusic will get a kick out of the Youtube video below for this song.

Kick Axe did a reunion tour (minus singer Christon) in 2003 and released Kick Axe IV. They still do one-off dates in Canada and North America. Good luck to them, they’re part of this country’s metal heritage.