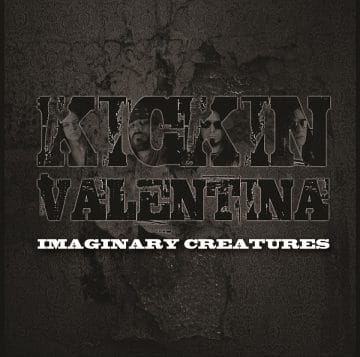 IMAGINARY CREATURES
To be released on August 11, 2017 (Mighty Music)

Review:
Four guys from Atlanta, Georgia, USA have been kickin’ it big time since 2013. In October of that year, the band released a self-titled EP featuring five tracks. 2015 saw an additional seven song issue from the band, known as Super Atomic. Honestly, Super Atomic was my first real introduction to Kickin Valentina, and I have been eagerly awaiting this newest offering.

I’m pleased to be asked to review the band’s newest full length issue, Imaginary Creatures. This album has been a long time coming for Sleaze Roxx readers. Let’s put it this way. In 2014, Skid, the Sleaze Roxx editor at the time, in his review talked about how Europeans had a stranglehold on mainstream sleaze, but, “Kickin Valentina are bound and determined to change that with a self-titled EP that packs a ‘Mike Tyson in his prime’ punch”.

Those were strong words, coming off a five song EP, yet prophetic. In July 2015, new Sleaze Roxx editor Olivier offered his opinion on the first full issue released by Kickin Valentina, “The songs on Kickin Valentina‘s Super Atomic show that there will always be a place for well played sleazy rock and also prove that the south east portion of the U.S.A. is ready and poised to give Sweden a run for its money”

OK, so who the hell am I to contradict Skid and Olivier?  Really?  Call me out on this if you don’t agree with all three of us.  Kickin Valentina are another wondrous example of re-interpretation of ’80s sleaze. While I love the fact that everyone from Warrant to Poison, Great White to Ratt (in all their various incarnations), and many other cornerstone bands are still producing, it really is bands like Crazy Lixx, Junkyard Drive, or Affaire (in 2017 alone!) that are driving what someone recently called The New Wave of Hair Metal. I still have my faves from back in my high school days, but I could easily imagine doing the same now with these bands.

Enough hype… I like the Kickin Valentina release — a lot! Hearing influences from Whitesnake to Cinderella, there really are some killer deep cuts on Imaginary Creatures. “Heartbreak” for example, drips with attitude and gives a solid performance from all instruments. Some tracks, like “Burning Love” drop into Little Caesar territory — kind of punk meets a ’50s sensibility.  But hell, “Eyes”, “Turn Me On” and “Devil’s Hand” offer me a great hard rock experience. “Eat N Run” stands out for me as a fantastic song that I would love to see live sometime. I’m feeling pretty solid on recommending Imaginary Creatures. It’s a must have for those that appreciate a new spin on what us ’80s guys now refer to as a classic “sleaze rock” sound.  Again, think of some of the newer bands that Sleaze Roxx targets. This album is the real thing.

With five and a half months left in 2017, it is entirely possible Kickin Valentina could end up in my annual top 10. Skid and Olivier weren’t wrong. Imaginary Creatures has lived up to Sleaze Roxx‘s estimations of this band, going back to 2014.  Gotta love consistency!

Oh, and thanks to a much appreciated chat with Kickin Valentina‘s Chris Taylor. He gave me a head’s up that there might be a new video coming on July 28th. Keep an eye on Sleaze Roxx to post it when the single is released. The album hits the streets on August 11th and is available for presale on Itunes, Amazon, or via the Kickin Valentina website.