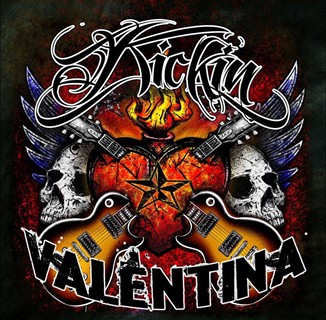 Review:
Everyone knows Scandinavia is the current breeding ground for all things sleaze, but Kickin Valentina are bound and determined to change that with a self-titled EP that packs a ‘Mike Tyson in his prime’ punch. Atlanta, Georgia, may not be the first destination one would expect to find a killer new hard rock band, yet that is exactly where Kickin Valentina came together — a group who could convincingly have called themselves ‘kickin ass’.

The real gem here is vocalist Joe Edwards, who has one of those raspy deliveries tailor-made for sleazy hard rock — often comparable to Fastway‘s Fin Muir or Brad Sinsel of the War Babies and TKO. However no band is successful due to a vocalist alone, no matter how great a singer sounds he/she needs songs and capable musicians backing them up — Kickin Valentina have both in spades!

“Get Ready” gets the festivities off to a sleazy start, but by the time “Dirty Girl” rolls around these tattooed degenerates really hit their stride. This hyper-driven little number is every bit as filthy as its title suggests, burrowing its way through your cranium with screaming guitars, a heavy bottom end and vocals perfectly aged with cheep booze and stale cigarettes. “Alone” could be considered Kickin Valentina‘s attempt at a ballad, but it has far bigger balls than your standard sappy love song, while containing the EP’s most accessible chorus. While not a bad song, the southern drenched rocker “Anita” does get a little silly with its ‘boom, boom, boom’ chorus, however you’ll soon forget all about that slight misstep when “Eat And Run” begins its pulsating descent into the sewers of sleaze that will stick inside your head like a wad of gum on your shoe.

No words could describe how much potential Kickin Valentina display on this EP. The Europeans may have a stranglehold on the cantankerous sleaze genre, but Kickin Valentina give us all hope that the scene is capable of surviving, and even thriving, in America. After hearing these five songs expectations will be extremely high for the band’s next collection of tunes.