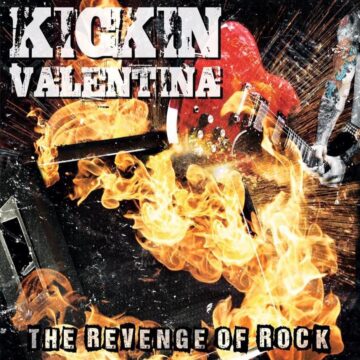 Review by wrestlingepicenter.com:
The other day, I got two CDs in the mail that were released on the same day. Here’s the strange part for me and my usual tastes — neither of them are veteran bands from the ’80s or before! Sure, both bands were clearly inspired by bands that were and may even have roots in some ways that link back to bands from that time period. But, both are 21st century bands. Hey, I’m growing! Or, maybe better stuff is finally being released? The albums I am speaking of are Wig Wam‘s Never Say Die and, the subject matter of this review, Kickin Valentina‘s The Revenge of Rock.

So, I’m going to plead a little bit of ignorance when it comes to Kickin Valentina. I know little to nothing about their history before a few years ago when D.K. Revelle came in as their singer. And, if you get right down to it, Sleaze Roxx is responsible for turning me on to these guys. Boy, I’m glad they did. What a bad ass, no bullshit, piss and vinegar rock ‘n’ roll band with zero apologies. The videos Sleaze Roxx posted of Revelle as the new singer performing their prior catalog peaked my interest. But, it was the release of “Sweat” that made me say, “I’m buying their next album!” And, I did! Sadly, “Sweat” is not on the album. But, a lot of really good stuff is. So, lets go over it.

“Freakshow” kicks off the album. It has a very catchy chorus but concerned me because there are effects put on the vocals that made me worried just how modern the album would sound. Hey, I’m growing, right? But, let’s take baby steps. I don’t think you’ll be plugging me into many octane bands that rock in a theoretical sense rather than creating music that actually sounds like rock ‘n’ roll. But, I digress. The chorus is insanely catchy and I was itching for more. The next song to come up took me way by surprise. Whereas the first track was very catchy with a little bit of a modern vibe, “Somebody New” is such a well written, classy, grooving track to sing along to. I almost got vibes of Eddie Money‘s “Walk On Water” here. Certainly softer than the debut track but one that I think really exemplifies what great songwriters these guys are.

“Rat Race” is up next. Oh yeah! This is the track that made me sure I made the right choice. With vocals that could easily be Joe LeSte on his critically acclaimed Beautiful Creatures albums (or harder Bang Tango efforts), this song has the sleaze oozing off of it. From the chorus “A fine little frame with a beautiful angel’s face, trying to excape, this rat fuckin’ race!” to guitar hooks that are so infectious and even a vocal noise I couldn’t even explain… Damn I love this track! “Strange” is up next. While I think the song could possibly elude to drug use or, at least, pot smoking which I don’t do and never have, the sentiment I certainly appreciate. “They’ll never see like me, they’ll never see through my eyes. They’ll never fuckin’ feel what I feel!” I could have written that. And, if you read my Facebook posts, I probably have written more or less that. “We’re not afraid to be strange!” Not at all! Never have, never will be! Chris Taylor‘s bass work here really shines through as a highlight.

“Lookin For Me” is one of those looking back songs at a love lost dipped in a little sleaze and rock ‘n’ roll dreams. Very catchy track though not quite as catchy as “Somebody New”. But, it has that throwback vibe I dig so much. “War” reminds me so much of “Macho Man” Randy Savage‘s 1999 WCW theme with the heavy guitar riff. No, not Pomp and Circumstance with guitars for those wondering what I mean. In ’99, Macho had a big breasted blonde woman named Gorgeous George who was a little bit of a hot mess emotionally. Anyway, Heber Pampillon‘s riff reminded me of that. I love that somehow “War”, a total of three letters, ended up with two syllables. Can’t explain it. But, I can say it is pretty freakin’ cool. “Heart Tattoo” is the most modern sounding song on the album surpassing “Freakshow” in that regard. Whereas “Freakshow” set the table for a Beautiful Creatures style record which I consider to be a more modern sound (and their debut album came out 20 years ago this year so “modern” is a stretch), this one has a more “Emo” feel. Somehow, I don’t get the vibe that was what they were going for. Even so, the song is very catchy with good hooks and a chorus that gets stuck in your head.

“End of The Road” is another looking back track this time not at love left behind like “Lookin For Me” was but instead is more about old wild times. Very catchy track where drummer Jimmy Berdine really shines here. “The Revenge of Rock” is next to finish up the album. The lyrics on the verses are great but the chorus is a tad lacking. Nevertheless, the second verse is “Rock ‘n’ roll heroes of our past. Priest, Maiden, and Crüe kicked ass. AC/DC, Sabbath, and Zep, GNR, and Aerosmith was the shit. The Scorps, KISS, and The Who, Van Halen, and Ratt & Roll too. The Fab Four, oh and the King, the Rolling Stones, and Bruce Springsteen!” Well shit, there’s about 1/2 of my CD collection right there and I legitimately have at least one album by each of those bands / artists with most being just about the whole collection. So, I listen to the same stuff Kickin Valentina listen to! That should surprise no one.

Overall, this is a darn good American hard rock album with a little bit of folksy southern swagger, a whole lot of in your face sleaze, and a rawness that gives the songs and the sound more of an edge. The other album I got, Wig Wam‘s Never Say Die, is also a fantastic album. But, it is much more of a polished and slick sound. Kickin Valentina‘s new album sounds great but kept a little of that raw vibe and grit which, for me, puts it over the top as the one I’m listening to more. The mix of Revelle‘s hard to describe vocal approach, which is a little different on every song and Heber Pampillon‘s guitar work, which is nothing short of superb, really drives this band. The lyrics, while more loose lipped with swear words than most in my collection, fit the sound and cut through the bull and connect with you. What I mean is, you don’t just hear pretty little words that rhyme. You feel what they wanted you to feel. That isn’t easy to do. But, they’ve done it here! Total home run. Highly recommend!

Review by Olivier:
It’s sing along time with Kickin Valentina! If I had to take a guess, I think someone must have sat down with the Kickin Valentina guys and told them that their best songs are the ones when people can sing along to them. Tracks such as “Get Ready” and “Turns Me On” have been staples of Kickin Valentina‘s live setlist for many years and with good reason. They are catchy and get the crowd singing along every time (or at least the two times that I saw Kickin Valentina play live). It seems almost a certainty that there had to be some discussions before or as the songwriting for The Revenge of Rock came along because there are five songs with easy to sing along big choruses on the band’s new nine-song record.

Although The Revenge of Rock still sounds like Kickin Valentina, there is no doubt that the group has softened its sound quite a bit and embraced harmonies in a much bigger way. There’s really only two songs on The Revenge of Rock that reminds me of the Kickin Valentina of old and those are “Rat Race” and the title track. Both songs have more of a rough and ready edge reminiscent of Kickin Valentina‘s first two EPs and even their full-length album Imaginary Creatures. Even Kickin Valentina‘s “new” singer D.K. Revelle seems to have adopted a raspier and harder edge delivery on “Rat Race” and the title track like his predecessor Joe Edwards used to do.

While I can appreciate that Revelle has now been in Kickin Valentina for a couple of years and the group already released the EP Chaos In Copenhagen back in late 2019, it seems inevitable that some comparisons have to be made between Revelle and Edwards. Even though I really like the first three Kickin Valentina releases with Edwards on lead vocals, I always found that singer’s vocals to almost be polarizing in that he had such a distinctive voice that the group was kind of stuck playing a certain song formula. Don’t get me wrong, I really like Edwards‘ voice but the harmonies and big choruses that are quite prevalent on The Revenge of Rock with Revelle at the helm seemed more difficult to pull off with Edwards.

Revelle seemingly gives more options to Kickin Valentina given that his singing is “softer” at times such as on the verses for “Somebody New” and “Strange” yet he can belt out the raspier edgier stuff too like on “Rat Race” and the title track. What might not come across on the album is that Revelle seems to be a much better fit within the band and on stage than Edwards ever was. Having dealt with the latter a little bit since his departure from Kickin Valentina, there is no doubt in my mind that bassist Chris Taylor, guitarist Heber Pampillon and drummer Jimmy Berdine had their hands full dealing with Edwards‘ capricious nature.

I have to admit that initially, I was a bit disappointed with the first single “Somebody New” off The Revenge of Rock. The reason for that is Revelle‘s singing during the verses seems a bit overshadowed by the music, which is not a problem that Edwards ever seemed to have. I just thought — and still think — that Revelle‘s singing during the verses should have been more prominent in the mix or a little bit harder edged in its delivery. Nevertheless, by the time the chorus kicks in on “Somebody New”, it’s almost impossible not to sing along with the band members. “Strange” follow the same type of formula as “Somebody New” but with stronger singing from Revelle during the verses. “Lookin For Me” seems to have a poppier feel to it compared to what can be found on prior Kickin Valentina records. “War” is an interesting track with a chorus tailor made for an easy to sing along experience in a live setting. Perhaps my favourite song on The Revenge of Rock is the catchy and peppy Jetboy sounding “End of The Road” with its lyrics reminiscing on the good old days. Funny enough, it’s worth noting that Revelle used to front Jetboy more than a decade ago for a short stint in 2010.

Reviewed by wrestlingepicenter.com and Olivier for Sleaze Roxx, February 2021