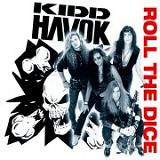 Review:
It may seem as if Los Angeles’ infamous Sunset Strip was the be-all and end-all when it came to hair metal. But the reality is that when hard rock ruled the charts there were bands from every nook and cranny the world over vying for a piece of the lucrative pie, and one of those bands was Florida’s Kidd Havok. Only now, with the help of the internet and Suncity Records, could Kidd Havok‘s long forgotten/never remembered demos finally get the treatment they deserved.

Roll The Dice proves two things; 1) that Kidd Havok had all the tools to become a household name, and 2) that Kidd Havok didn’t have enough originality to stand out from the crowd. There is nothing wrong with following in the footsteps of Swingin’ Thing‘s party glam and Tora Tora‘s no-frills rock, but in the end it makes things rather predictable. A revolving rhythm section likely didn’t help the band out either, but all of that is in the past.

Vocalist Johnny B. has a great rock voice, often sounding like Tora Tora‘s Anthony Corder with just a hint of nasal twang and guitarist Scot Marcs isn’t afraid to let loose with solos that would make any aspiring musician envious. As a team, and as the nucleus of the group, those two make songs such as “1 Push”, “Candy Store”, “Treat Me”, “Night On me” and the best of the bunch, “Lady Luck”, unrelenting rock songs. Interestingly enough the entire CD is filled with high-energy rockers, as there isn’t a ballad or mid-tempo tune to be found.

If you’re looking for ground-breaking music you’ve come to the wrong place (probably even the wrong website), but if you’re in the mood for a satisfying and fun hard rock CD then Roll The Dice is what you need. I have a gut feeling that Kidd Havok‘s party rock made for an energetic and entertaining live show, and seeing as rumors suggest the band is working on a new album we might not have seen the end of Kidd Havok yet.