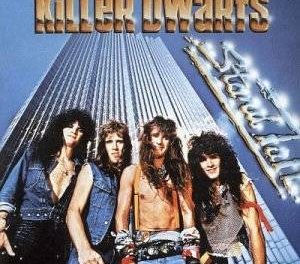 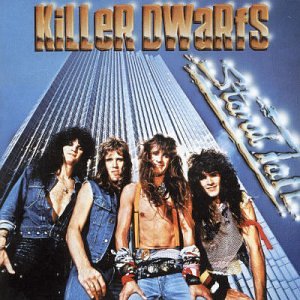 Review by Tyson Briden:
Back in 1986, when this album was released, the Killer Dwarfs were a band you wanted to listen to, due in part to the comedy that was within their videos. I don’t mean any disrespect to the band’s musicianship, but it was a genius way to get noticed.

I first remember seeing the Killer Dwarfs on City TV’s Toronto Rocks back in 1983-84. I would make a point of tuning in on Wednesdays for Mid-Week Metal Mania” hosted by John Major. Heavy Mental Breakdown was on heavy rotation back then and was something I found quite comedic. My understanding is that this video was filmed in my hometown of Oshawa, Ontario, Canada.

Back then, many bands were making great funny videos to get noticed. Twisted Sister’s “We’re Not Gonna Take It” and “I Wanna Rock as well as Blotto’s “Metalhead” are other comedic videos that come to mind. Music videos in those days were all so new and exciting.

It would be three years before I would hear of the Dwarfs again. This time it was through City TV’s all music station Muchmusic. The two videos that would appear on a regular basis were “Stand Tall (Stick To Your Guns)” and “Keep The Spirit Alive” taken from the album that I am reviewing today — Stand Tall.

In the “Keep The Spirit Alive” video, Russ Dwarf is seen rolling down a hill, in a crate, into a swimming pool while singing the song with his hands and eyes poking out through the crate. The end of the video has Russ crash through the roof of a club as the band is onstage playing, the crate breaks apart and Russ joins the band without missing a beat. He then proceeded to ride around on his infamous tricycle. Funny stuff.

The “Stand Tall (Stick To Your Guns)” video was just as funny. The Stand Tall album was an independent release, so to lead the audience to believe that this album was truly made in their basement, the band is seen pressing the album themselves. With one member drawing the cover art, wrapping it in shrink wrap, popping it the microwave and when it comes out, it is what would show up on the shelves. Brilliant.

As funny as these videos were, we can’t forget the seriousness of the music and the musicianship that created it. “Stand Tall (Stick To Your Guns)” is the perfect lead off track. Guitarist Mike Dwarf’s cool riffing, Darrell Dwarf‘s over the top drumming, Bad Ronbo Dwarf’s solid bass line and Russ Dwarf‘s unique and powerful voice give this song a very open feel. The lyrics to the chorus say it all about a band that has been kicked down a few times but is back for vengeance.

“Human Survival,” “Up To You And Me,” “Borderline” and “Through Animal Eyes” move the album along nicely. The guitars are crunchy yet melodic in spots, the bass fits really nice in the mix and the drums are as they should be, keeping the flow of the music in a precise fashion.

The highlight for me on this album is Russ Dwarf‘s dominant vocals. He has a way of singing that makes him different from anyone else. Due to the videos I previously mentioned, you can picture in your mind his crazy antics going on during every song. There’s a crazy madman, on a tricycle singing through my stereo. 1986 was a time when you could get away with such antics and everyone accepted it. It really was a great fun era of music.

“Keep The Spirit Alive” starts off the second side of the album (track six on the CD). This to me is the definitive Killer Dwarfs song. When I think of the Dwarfs, this is the song I think of. I mean “Dirty Weapons,” “We Stand Alone” and “Hard Luck Town” are all great songs that were also radio singles. This one just remains in my mind as a visual for the band. It has a coolness about it that is hard to duplicate. That chorus is so infectious. The overall band’s performance is fantastic.

“Believe In Me” and “Do Or Die” are great album cuts showing the hard rock edge of the band throughout. “Believe In Me” showcases Mike Dwarf‘s flash as a guitarist, with a great guitar bit at the beginning. “Do Or Die” starts with a cool drum intro that no matter what always sucks me in. I love it when a band builds into a song, especially with the drums.

“Out In The Streets” and “Bite The Hand That Feeds” end the album with power. “Out In The Streets” is an all-out, sing along Dwarfs song. Mike Dwarf‘s clean guitar beneath the chorus adds a nice depth to the song. “Bite The Hand That Feeds” gives the impression that it is a live track. To be honest, I have a hard time deciphering whether it is or not. It is an up tempo rocker with a killer guitar riff throughout. It has a shuffle feel to it that has your toe tapping. Of all the tracks, I enjoy Mike Dwarf‘s guitar playing on this the most and this may be my favourite track on the album.

Stand Tall is an album that I still enjoy listening to. It was released on Maze Records back in 1986 with distribution through A&M Records. My assumption is that the budget wasn’t what it was for albums such as Big Deal and Dirty Weapons. For what it is, it sounds fairly decent. It’s not perfect, but the songs are great and that’s what matters most. In retrospect, Stand Tall holds up very well today.

Review by Deke:
Man, 1986 and after I seen the two videos — “Keep The Spirit Alive” and “Stand Tall (Stick To Your Guns)” — what can you say? Once I saw them on the Much Music Pepsi Power Hour, I had to get this album immediately!

Considering these guys weren’t on a major label at the time, the way they did those two videos was with a real great sense of humour. The packaging of the Stand Tall vinyl (lyrics and pictures) was very impressive and certainly compared to say, when I bought new releases by major label bands like Ratt where there was no packaging but a clear sleeve to keep the record in (meh)! So full kudos to the Dwarfs! You really impressed this record seeking young rock guy in 1986 at the age of 19!

Also the fact that all their names ended in Dwarf was funny as hell… Seriously though, let’s explore this little gem of a cooker from Russ Dwarf, Mike Dwarf, Darrell Dwarf and Bad Rondo Dwarf.

“Stand Tall” — All four Dwarfs kick down the walls, the song trucks forward and hey, these guys mean business! The verses, chorus, music — everything is here all rolled into one little kick ass opener! Full props to the person or persons who came up with the video idea. The cool thing is, here we are in 2016 and the video still holds up well! Kids — this is how records were made back in 1986. Ha! It’s also clear that there will be no moping around with the lyrics “Stand tall, stick to your guns” and kick ass if anyone bugs you. Great start!

“Human Survival” — Mike Dwarf opens with a power riff and for the next four plus minutes, Russ Dwarf tells us all how we will survive. Don’t give up hope peeps say the Dwarfs and by golly, I won’t! Good song with a mid tempo groove.

“Up To You And Me” — Some creepy eery sounds start the song and Bad Ronbo Dwarf and his bass do some Gene Simmons like “do, d0, do” and he locks it in with Darrell Dwarf on drums. This is borderline ballady — kinda maybe — not saying but it features some nice acoustic guitar mixed with electric of course and the song ramps up come chorus time.

“Borderline” — It’s about walking the fine line on the borderline. This is a no frills straight rock song and the Dwarfs are making sure that the Winnebago is still gassed up ’cause the wheels aren’t coming off ’til the party ends.

“Keep The Spirit Alive” — One of the coolest thing about these guys is not only that “Keep The Spirit Alive” is a great song but the video as well! Actually, the two videos — “Stand Tall (Stick To Your Guns”) being the other — are what sold me at the time plus this song is about walking before you run and not giving up. Positive vibes all around here folks. The verse, pre-chorus, chorus, guitar solo, drums, singing and bassing is all here. What a gem of a tune! When you’re having a shitty day, play this track.

“Believe In Me” — Umm yeah, these guys wrote a great track here and it shows in the chorus. They still play this song today well maybe not today but when I caught them on their Reunion Of Scribes tour about 12 years ago here in Thunder Bay at the Inntowner (bar), they rocked it. That’s the cool thing about these guys as they write tunes that ain’t gonna bum you out. They give you hope and promise so you “Believe In Me.” Like I said, the chorus is the money shot… Super catchy!

“Do Or Die” — Darrell Dwarf lays down the drum groove and the great thing is the band is not letting down even this far into their album. “Do Or Die” says Russ and I believe him. I really do! Mike Dwarf throws down a good solo while Bad Ronbo Dwarf on bass hammers the pedal to the metal !

“Out In The Streets” — Mike Dwarf starts off the tune with a power riff followed by some soloing right off the hop! Russ Dwarf grabs you by the neck and takes us down to the street and tells us how to live. Don’t give up! Kick ass is what he’s saying.

“Bite The Hand That Feeds” — Some added texture at the beginning of this song with the crowd mixed in — like Def Leppard‘s “Rocks Off” from On Through The Night — and Mike Dwarf and Darrell Dwarf rocket the ship straight to the moon at rapid speed! Slam Bam Thank you Mam! This song rocks fast and Russ Dwarf keeps up with the vocals while Bad Ronbo Dwarf nails the door closed with his bass! Awesome way to end an album — basically a kick down the door scorcher!

In conclusion, what a great little ball of independent rock in the form of Stand Tall! These guys did it their way on this release and they should be commended for that. The Dwarfs put the time and effort into the packaging of the album (lyrics and pictures), the videos and the songs. I bought this back in 1986 on vinyl and I still have it.

Reviewed by Tyson Briden and Deke for Sleaze Roxx, November 2016

Original promo video for Killer Dwarfs’ “Stand Tall” without any editing or effects done by music television stations. Rip is one generation from the master!…

Buy the new CD Wireless at http://russdwarf.bandcamp.com Our first Video from the “Stand Tall” album…We had a Ton-O-FUN making these vids… Director Keith…