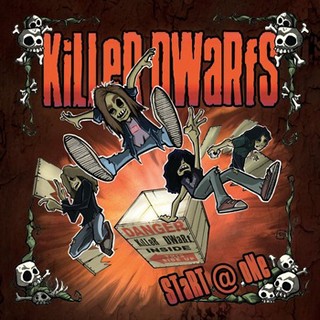 Review:
The Killer Dwarfs are back… and that is great news for fans of sleaze rock and heavy metal! Start @ One was supposed to be the Killer Dwarfs‘ sixth album back in 1993, unfortunately, with the grunge movement gaining tremendous momentum and wiping out various labels’ interest in a lot of metal bands at that time, the disc never saw the light of day. Just like their American counterparts Tora Tora — who released Revolution 17 years after it should have come out — the Killer Dwarfs‘ ‘lost album’ has finally been released 20 years after first recording it. Hot on the heels of lead vocalist Russ “Dwarf” Graham‘s very well received and stellar Wireless CD — a collection of greatest hits done acoustically — the Killer Dwarfs have likely realized that there is still a good market and demand for the band with what appears to generally be a metal resurgence in the last couple of years.

Not only are the Killer Dwarfs finally releasing their ‘lost album’, but the original master tapes were digitally remixed and re-mastered to get the sound up to industry standards twenty years later. The end results are exactly what fans have been longing for — classic hooks with the inimitable singing of Graham. Start @ One is not as strong or as commercially accessible as the Dirty Weapons album, when the band hit their pinnacle, but it is still a solid CD from start to finish.

“Lonely Road” starts off with a nice little riff before Graham‘s familiar singing instantly lets the listener know that the Killer Dwarfs are back. All of the tracks on Start @ One flow nicely from one to the other and showcase how to combine the metal sound with melody. My favorites are “Down In Hollywood”, which showcases Graham‘s fine vocal range and intricacies, the made to be played live “Psycho Circus” (hey KISS, did you take that song title from the Killer Dwarfs five years later?) and “Sky Is Falling”, with its great sounding guitar riff throughout. My only complaint is that some of the songs, such as “Walk On By”, could have been played a tad faster — it seems to me that the Killer Dwarfs play their songs at a faster pace when I listen to the band’s live Reunion Of Scribes. I suspect that whichever of these ‘new’ tracks are played live will be at a faster pace.

It should be noted that the Killer Dwarfs had at first advertised that Start @ One would also contain two new tracks — but those never made their way onto the CD. The band did recently post a Facebook message on Sleaze Roxx stating that “schedules and time restraints did not allow the new tracks to make it on to the CD”. While some people will surely be disappointed that there are no new recordings included, I for one prefer to only have the tracks from the original sessions on Start @ One rather than have the band add two songs recorded twenty years later and essentially from a totally different era. As the Killer Dwarfs pointed out, this just means that the band already has two songs ready for an upcoming studio CD.

Hopefully, Start @ One is the start of a long second career for the Canadian rockers — in the same vain as Europe has had since they reformed and put out Start From The Dark back in 2004. It is great to have the Killer Dwarfs back again with some ‘new’ — or rather just previously unreleased — material, and even better news that the band is touring in support of this CD.