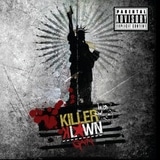 Review:
“Killer Klown start their career in August 2005 with the aim to create the best Sleaze-Modern-Rock band in the world.”, so one of the promo inserts from this brand-spanking-new release reads – in charming broken English, of course. The band in question hails from Italy, the newest country to produce a seemingly endless stream of sleazeballs. With this recent influx of spaghetti-rockers, the sleaze movement must be considered a global phenomenon. Well, an underground phenomenon at best. Still, the point remains; with so many bands, does Killer Klown have what it takes to ‘stick it out’ (last corny Italian reference, I swear) in this oversaturated market for big riffs and bigger hair?

In a word, yes. These guys really do sound like themselves, and that is no easy task in a genre teeming with Dave Lepard sound-alikes and Tracii Guns worshippers. For one thing, they seem just a little bit more pissed than most of their contemporaries. This anger is not nearly as contrived as, say, Nikki Sixx circa 2004 (“Shut The Fuck Up”), but far more akin to Nikki Sixx circa 1983 (“Bastard”).

As far as the sound goes, it’s top notch. Lead singer Gabry spits out the lyrics in a way that makes the ears tingle with joy. His voice is raspy and high, but his mid-range notes sound great. Resident axeman Diablo relies a bit too much on the wah pedal when it comes time to shred, but this is only a minor complaint when the music is just this damn good. Each riff hits harder than the last, and when the choruses come in it is pure hard rock heaven.

The mantra of Killer Klown is perfectly summed up by the band themselves; “No compromises, no make-up, no rules, no mercy, just a great Rock ‘n’ Roll explosion in your face!” Well done, lads. Until the next explosion, this sleazeball salutes you.