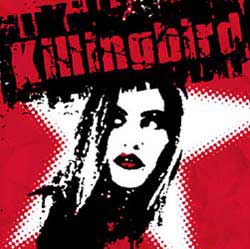 Review:
Loud, rude and crude, Killingbird knows what ingredients it takes to make a
great sleaze rock album. Similar in sound to the Beautiful Creatures, they
have taken influences from 80’s bands such as Faster Pussycat and Bang
Tango, and dragged them – kicking and screaming – into the 21st century.

All songs hover around the three-minute mark, and display a punk influence.
But don’t begin to think this is a straight ahead punk album, thankfully it isn’t.
It’s an updated version of the 80’s sleaze rock genre, minus the guitar solos. Standout
tracks include “Not Long Dead”, “Cocaine Tongue” (with a chorus that for some reason
reminds me of Junkyard), “Maybe I’m Afraid” and “Sometimes You’re Strange” (with
its interesting chorus of “Oh fuck it girl, whatever. I tell ya babe, sometimes you’re
strange”).

Once in awhile while listening you will start to think that all the songs
sound the same, but then something will appear to kick your ass and change your mind.
If bands like Killingbird are the future of the sleaze genre, then at least
we will have something to look forward in the upcoming years. Plus, how can you not
love a band with a lyric such as “I’m sick of being sober”? Check the band out at
their official site