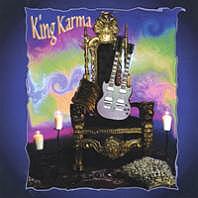 Review:
King Karma implements a retro sound that has more in common with 70’s radio rock than any current trend, which isn’t surprising considering both Markus Wolfe and Todd Ronning toured with the legendary Paul Rodgers. King Karma sounds almost identical to Cry Of Love, another retro band that achieved some minor success some ten years ago.

Throughout the album you can hear influences from several of rock’s staples – Lynyrd Skynyrd, Deep Purple, the Allmans and Bad Company to name a few, while the vocals fuse together the classic deliveries of Glenn Hughes and Bob Seger. Blues based guitar licks permeate throughout standout tracks like “Blue Monday”, “Into The Everlast”, “Mama’s Pride” and “Shake My Bones”. “Breathe” is the closest the group comes to present-day styles with its Harem Scarem melodies. In fact I can’t find a song on here that I don’t like!

Anyone that has heard Cry Of Love‘s Brother will know exactly what King Karma sounds like. This release takes you back to a time when you actually needed talent to be considered a “musician” and not simply an image. This highly recommended release can be found at www.kingkarma.com.