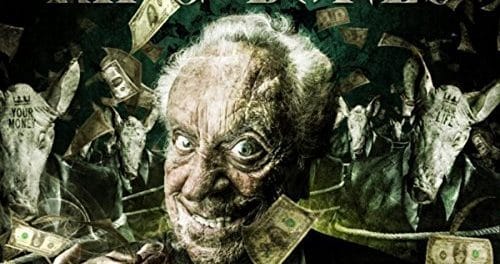 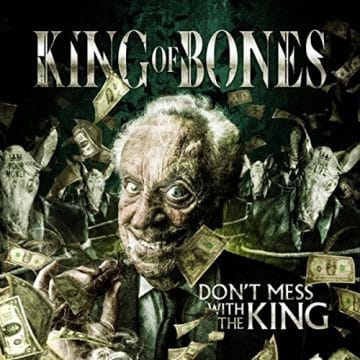 KING OF BONES
DON’T MESS WITH THE KING
Released on September 19, 2016 (Independent)

Review:
As I spin this silver platter for the umpteenth time, thoroughly saturating my senses in what will EASILY be one of my top five releases of 2016 (if not numero uno), I wonder what it would be like to sit on this gem, not share a word or a sound with anyone and harbor this beautifully crafted and played sophomore long play to myself and not allow its prowess out as it will twist up so many minds with what can only be described as pure hard rock perfection… Hmmm, or shall I just keep it to my selfish self? No, unfortunately for me, the band is too damn talented and the album just too damn good not to share and be damned if this very well produced in your face rocker is not self-released! Why are these guys not on a label? I suspect just too damn good.

Please allow me to introduce you to São Paolo, Brasil’s King Of Bones and the should be/soon to be classic 2016 release Don’t Mess With The King.

What we have here is a collection of 13 hard rock/melodic rock anthems. This album and the band’s influences are easy to spot in the likes of Dio, Badlands, Ozzy, Winger, Dokken, Deep Purple and so on. With homages to players from the greatest musical era known to man, woman and child — the all mighty ’80s — think Ronnie James Dio, Ray Gillen, David Fefolt for vocalists and for guitar prowess you can’t help by hear Zakk Wylde, Jake E Lee, George Lynch, Reb Beech, et al. and lest not forget the foundation of any band thunderous bass and drums to compete with the likes of Bob Daisley and Cozy Powell. Yep heavy heavy arena rock hitters! Julio Federici (vocals), Rene Matela (guitar), Rafael Vitor (bass) and Renato Nassif (drums) are on a b-line to this ‘A-list’ of musical who’s who in hard rock.

As we dive into Don’t Mess With The King, we are started off with a Saigon Kick inspired instrumental entitled “Intro,” simple enough yet befitting to the tone of “No Way Out” which from note one of the Wylde infused harmonically enhanced soaring metal riff, we are in for a fist pumping treat. The song is powerful on all levels and the solo — oh my — be prepared to be smitten with Rene. Good gravy, this kid shreds! Lead off video “Hold Me Closer” is next and if this “Masi God Promised A Paradise” fueled lick and orchestration doesn’t speed up your pulse, then who knows what will. Stellar track with an all too proficient song structure, rhythm, vocal and melodic chorus. “Wherever You Are” does not disappoint and is so very “Shot In The Dark” 2016 that you will be blown away. Again, very original yet so so catchy and with a massive nod to Mr. Lee.

“Walking On The Edge” slows things down for all of 35 seconds with its classically inspired intro and then bashes the listener in the face with yet another huge rhythm riff and double kick drumming that segues into a chugging verse and another hook laden chorus. Epic for frickin’ sure. “Black Angel” again starts off a little acoustically and slightly countrified (think Tesla) but damn, smash in the grill yet again with a huge Deep Purple “Perfect Strangers” inspired key and guitar riff that is just amazing. Backed tenfold by a chorus that is as catchy as the common cold and just as deadly. “Blinded By Faith” is a very well executed arena rock slow tempo ballad with a strong topic. “The World Goes Round” is another keyboard driven rocker with a brilliant chorus and solo of epic proportions. “Goodbye Yesterday” is the ballad and it has all the quintessential elements — big build up, check — soaring chorus, check — very much a staple for any great ’80s hard rock album. “Dry Your Eyes On Me” fools the listener with its title but turns out to be another mid tempo rocker. “I Am” and “No More Lies” are two further great examples of mid-tempo rockers with heavy musical verses and soaring choruses. “Point Of No Return” rounds off the disc with a heavier “Ultimate Sin” inspired rocker with two bagfuls of guitar squeals and a very toe tapable verse and chorus. The band certainly has crafted a competently played, extremely well written and highly listenable album with every element we have come to associate with all of our favorite ’80s hard rock classic releases. Well done boys!

2016 has been a year of inane challenges, so consider the gauntlet thrown down. I double, no wait, triple dog dare you to listen to this album and not be smitten. The disc is a 100% play through, no songs skipped and every track memorable.