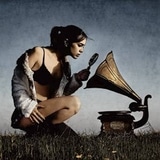 Review:
When I listen to Kingdom Come‘s latest release Magnified, I can’t help but feel this is how Steelheart‘s last album should have sounded. Both CDs are far removed from the band’s original days, but in the case of Kingdom Come vocalist Lenny Wolf hasn’t changed a bit. His voice isn’t hidden in distortion and overdubs, and even though the music itself has ‘matured’, at least fans can still relate to that voice. That simple fact makes all the difference in the world.

If you are expecting to hear “Get It On” or “Do You Like It” all over again you’ll be disappointed. To call this a hard rock album would be expanding the definition of the genre. Magnified is what it is, a fairly mellow and somber offering, a collection of songs that likely wouldn’t work fans into a frenzy at a live gig, but it may bring out some lighters.

As a whole Magnified doesn’t offer much variety, yet it does manage to draw the listener in. “24 Hours”, “Over You” and “Unwritten Language” could all be considered heartfelt ballads with the former not that far removed from the band’s humble beginnings. Meanwhile, “So Unreal” is the type of song that always gave Kingdom Come the Led Zeppelin ‘clone’ tag. As far as actual rock songs go, there are only a few like “No Murderer I Kiss”, “Sweet Killing” and “Hey Mama” (which includes one of the few memorable guitar riffs).

Magnified may at times seem like Kingdom Come is trying too hard to be current, yet it isn’t a completely unexpected release from Lenny Wolf and his latest collection of sidekicks. If any bands want to evolve/change their sound, this CD is the perfect example of how to do it successfully. Be forewarned though, you’ll need an open mind to get into Magnified.