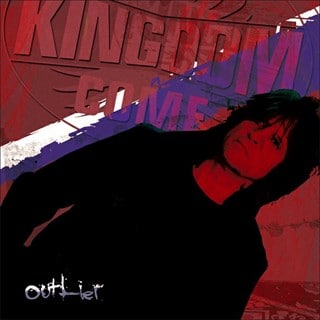 Review:
The whole Kingdom ‘Clone’ jab always had a bit of a disingenuous air about it… plenty of hair band singers back in the day sounded suspiciously like David Lee Roth, every guitar player wanted to be Eddie Van Halen, and then Mr. Jimmy Page himself went and collaborated with another Robert Plant sound-alike in David Coverdale! The fact that Coverdale/Page turned out to be a phenomenal album didn’t really mitigate Page‘s hypocrisy. The tone was clear — sound like anybody you want, as long as it’s not the almighty Rock God himself, ‘Sir’ Robert Plant.

Fast forward a quarter century and those parroted accusations are still haunting Kingdom Come mastermind Lenny Wolf even as he burrows deeper and deeper into mainstream irrelevance. Given those facts, Outlier may seem like an odd title for a Kingdom Come album, none of the ten songs present offer anything you haven’t heard from Wolf in recent memory, but I guess in an era where basically every dormant genre of decades past has been commercially revived, except for glam metal, Wolf has every right to consider his work marginalized.

To Lenny Wolf‘s credit, at no point does he hedge his bets by incorporating any of the more socially acceptable, modern revival genres into his first album of new music in four years (i.e. the ever trendy stoner rock landscape sports any number of ’70s-endebted influences that are well within Wolf‘s wheelhouse). Sure, “Rough Ride Rallye” and “When Colors Break The Grey” have that overproduced electronic sound that some have — perhaps overstatedly — referred to as “industrial” influences in the past, but Wolf has been playing that hand for years now and, besides, industrial/EBM is maybe the one other genre besides glam that hasn’t staged much of a comeback in popularity.

Outlier, then, is a record on Lenny Wolf‘s terms. If that doesn’t sound like any kind of change of pace from his last few “one man show” albums, that’s because it really isn’t. He’s still making the same insular, non-trendy mish mash of blues rock, glam metal and modern rock that he’s done for the last two decades. The difference here is that the rule of diminishing returns that has plagued the Kingdom Come discography has been broken for the first time in years. Granted, nothing here really aspires to the same peaks as the classic first two albums, but for once songs like “Holy Curtain” and “God Does Not Sing Our Song” have more than just a repetitive guitar riff to hang their hat on. Those two tracks feature some truly impassioned singing from Wolf (not to mention just an overall epic, sweeping feel) where the German frontman often seemed to phone it in on the old blues rock tunes. That latter fault is not entirely absent here — there’s nothing particularly inspired about straight ahead riff-based songs like “Skip The Cover And Feel” or “Let The Silence Talk”, but it’s probably too much to ask that every track be memorable on a throwback glam album in 2013.

The bottom line is that Lenny Wolf has managed to add three or four “greatest hits” worthy tunes to the Kingdom Come catalog. Throw “The Trap Is Alive” and maybe “Running High Distortion” in there along with the two mentioned a paragraph back and Outlier should be enough to exceed any reasonable expectations.

Reviewed by Jeremy Ulrey for Sleaze Roxx, May 2013