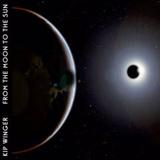 Review:
The only reason why this review found it’s way onto Sleaze Roxx is because it was recorded by the front man and main songwriter of one of the 80’s most popular rock bands, Winger.

Kip Winger was a very popular rock-star in the late 80’s and early 90’s, and one of the most ridiculed afterwards (remember Beavis and Butthead?). On his solo releases Kip has completely changed his musical style. It isn’t monumental hard rock any more, but rather an abundance of slow, ballad-like songs. His last release, Songs From The Ocean Floor went as far as sounding like a record that spa owners would use to calm their clients. Not that the songs were bad, they were well written, but they didn’t sound like Winger at all.

Kip Winger‘s newest solo release, From The Moon To The Sun, is much the same. Even though it follows in the steps of its predecessor, it is even calmer and more Tantra-like than previous works. Kip‘s musical style has changed a lot, but unlike other rockers he didn’t go for grunge, instead adopting more of a ballad-like, progressive, even neoclassical approach. On From The Moon To The Sun, Kip adopted a lot of Turkish and ethnic instruments to his sound, which in my opinion is ok, because diversity matters.

The main problem with this record is that it isn’t really a rock record at all. While Winger classics like “Easy Come Easy Go” or “Can’t Get Enough” were oozing sleaze and rock power, here you won’t find a real punch. It’s all more melodic with thoughts of rocking and picking up chicks long gone. Needles to say if you’re a straight forward rock fan this record won’t appeal to you.

So If you want to go to sleep, or go for a meditation session, feel free to use this new record by Kip Winger. Oh, and one more thing, I like Kip Winger. He’s a great singer and songwriter, but he doesn’t rock anymore – at least not without his Winger bandmates. Goodnight.