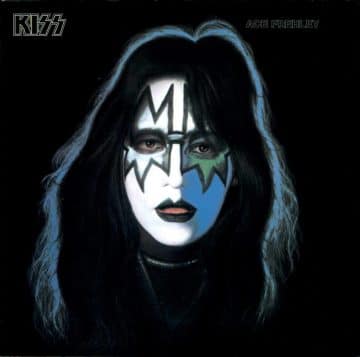 Review:
Much to the possible chagrin of his KISS bandmates, in 1978, lead guitarist Ace Frehley pulled off the major rock and roll feat of creating the most popular of the group’s four tandem release solo albums. Not that Ace was ever deemed incapable but in contrast to overachiever Gene Simmons, songwriter Paul Stanley, and jazz aficionado Peter Criss, Frehley was simply considered a lazy guitar player more interested in the fun, party side of rock and roll than the more serious creative side, in particular possibly even less interested in the effort required to have a serious creative side. Man, did Ace prove his KISS bandmates wrong. Stanley and Simmons may have looked at bad boys Criss and Frehley as just a couple of second rate rock and roll cut ups so surely the last thing they considered was either being any sort of competition as far as topping them when jointly releasing their 1978 solo albums.  Especially Simmons who went so far as to stack his solo album with popular artists like Cher and Donna Summer, as well as members of Starz, Aerosmith and Cheap Trick. In comparison, the working roster on Ace’s debut solo release is minimal and the results more raw rock and roll. No overproduced Hollywood smoozing for the Spaceman, just simple down and dirty, grab a beer and bury yourself in rock and roll until the job is done. Nothing more, nothing less and forty years later, still as rock and roll from start to finish as anything since from the members of KISS.

Anyone that assumed that Frehley would be lucky to even put a couple chords together, never mind complete a full on solo album, had to be mouth open frozen on hearing blistering first track “Rip It Out.” If Ace hadn’t already proven himself after penning KISS classics “Cold Gin”, Parasite, and “Shock Me”, following his killer 1978 production, few could criticize at least his ability to create rock and roll. The difference in the successes of the solo output was perhaps most noticed by Simmons and Stanley as Frehley contributed three songs each to following KISS albums Dynasty and Unmasked while Criss barely uttered a soft “meow” before splitting. On “Rip It Out”, Ace created a near perfect album opener that is all macho New Yawk rock and roll with blistering drums and  guitar and breaks that in 1978 made kids try and play air drums, bass and guitar at the same  time. Even Frehley’s vocal is tough. But “Rip It Out” was just the tip of the Ace solo iceberg.

To this day, “Speedin’ Back To My Baby” is my all-time favorite Ace Frehley tune, solo or on any KISS album. For me, it is all rock and roll from the blistering opening solo break to the vocal kicking in just as the songs drops into a groovy chug. The clever lyrics are catchy and scream sing-along and the weird fade break into the solo? Totally killer and totally Ace. Rock and roll rarely gets better and right off the bat, Ace hits with a one-two punch of rock and roll that is feasible to just shrug off making it possible for Ace to swerve his spaceship in the direction of any kinda musical planet he wants.

“Snowbind” and “Ozone” bring an even slower chug of a groove to change things up, the former smartly revising early Ace while the latter is sort of an Ace takes on classic ’70s rock. In both cases, Frehley delivers a groovy slower pair of tunes while retaining killer rock and roll guitar. It’s a great break in space before jumping into the more fun power pop injected portion of the record. As catchy as anything on the pop charts in 1978, “What’s On Your Mind” is fun and filled with what kids dug about rock and roll in the late ’70s. It’s pop, it’s bubblegum, but somehow still unmistakably rock and roll and a perfect lead up to the biggest hit from all four 1978 KISS solo albums — Ace’s cover of Brit glam rockers Hello 1975 tune “New York Groove” — a song that makes way more sense as an Ace tune and over the years has become sort of a theme song for Frehley.

“I’m In Need Of Love” comes off as a sort of “Shock Me” part two with a bit more of an edge before “Wiped-Out” takes a classic rock and roll theme and shoots it into outer space and delivers content that at least two of his KISS cohorts wouldn’t dare go ten feet near. More than likely on first listen, Simmons probably shook his omnipotent “holier than everyone else on earth” head in disgust but once again that’s just a part of what makes Ace actually the most “rock n roll all nite” member of KISS and possibly the most loved. While Peter seems like your gramps, Paul like that unapproachable coffee shop hipster, and Gene like everyone’s least favorite know-it-all, Ace is just a corny, fun-loving, party guy Spaceman. Sci-fi/gadget geek with a clumsy side that anyone can relate to yet, still one of the most influential rock musicians on the planet!

If cool rock and roll songs filled with outer space, cars, fun, and partying aren’t enough, Ace closes out by  introducing the world to the first installment of the “fractured” franchise, his own ongoing instrumental “Fractured Mirror”, the precursor to future editions a la “Fractured Too” and “Fractured III.” One shouldn’t be surprised if one day Ace doesn’t irritate us with another version or three in the future but in 1978, the original was kinda cool… for the first few listens at least. But hey, it fits and at his worst, Ace’s weakest tune is still more rock and roll than a few of the tunes from his band members’s other solo albums and certainly way better than anything on Gene’s Asshole CD.

By the time the space dust had cleared, Ace pretty much came out on top of the pile of 1978 KISS albums leaving Peter, Paul, and Gene “Wiped Out” and understandably so. While each album has its own unique charm and coolness, Ace’s is just well, cool. Frehley’s own version of a sleeper if you will, laying the “New York Groove” on not only KISS fans, but his own bandmates as well.