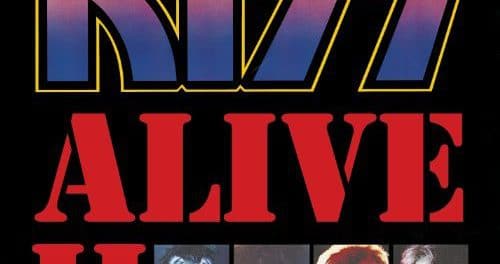 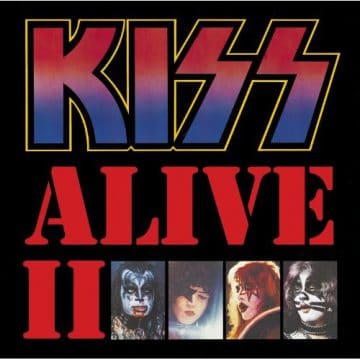 Review:
In 1977, I was an 11 year-old skateboard riding, music loving, shaggy-haired kid roaming the hills of Ft. Riley, Kansas. If it wasn’t on skateboard, I made my way around town on my trusty bicycle which ended up with more transformations in a couple of years than David Bowie and Madonna had in their careers combined! My most trusted companion then was either my little transistor radio or battery powered cassette boombox each blasting out everything from Andy Gibb and Alice Cooper to ZZ Top and Led Zeppelin. Oddly enough though, while pretty much everyone was being played on the radio, the most visual band on the planet (or at least in my world) hardly ever received play on the radio waves and that band of course then was KISS. They were everywhere! T-shirts, notebooks, backpacks — just everywhere even out of the way Ft. Riley, Kansas the home where the buffalo roam.

I had discovered KISS accidentally via the song “Beth” and along the way just ate up as much of their records as I could but man, 1977’s Alive II, with all of its bombast and crowd noise, just did it for me. Heck, even years later, I can put on the vinyl and even though over the years things have come to light about the live validity of some of the tracks, I still get goosebumps hearing the record. Maybe not the same kinda ones I got in 1977 when I was still a naïve kid who had yet to really indulge in the magic of a live concert in person but yeah, as I listen to it even right now writing this review, I am moved to memories of a great time in my life 40 years ago. As I took the album out, I once again marveled at the colorful majesty of the jacket, the wild visual of the band in concert on the centerfold and even the inside sleeves themselves. So you can imagine that the moment the needle touched the black edge of side one and it crackled, I could feel a bit of a swirl in my gut. When the audience comes in and the announcer introduces the band and suddenly “Detroit Rock City” is underway, yeah, it’s kinda tough to not wanna just forget writing and wrap my brain around the sound coming from my stereo especially once the whining guitar kicks into “King of the Night Time World.”

Fifty-one years old and yeah, I’m still a rock and roll junkie. Thank you to whomever branded me that years ago… Maybe one day, I will write that book. Lol.

No sooner does the song come to an explosive end does Paul Stanley mention the gals in the audience and out of all the things I was crazy about in 1977, girls were what I was most obsessed over. Even so, back then, I still wasn’t totally sure why anyone, especially Gene Simmons would wanna hangout in the “Ladies Room” but pretty sure it wasn’t too much later that I figured it out. Even so, side one closing tracks “Making Love” and “Love Gun”, despite any young innocent bones left in my body, provided enough a shot of emotion to make me wanna bounce off the bed in full on air guitar mode. Hell, if I wasn’t afraid of breaking something in my much more knowledgeable older body, I’m pretty sure right now I’d be doing the same. Listening on vinyl at this moment, I’m reminded how incredibly awesome these songs were and still are. How could a kid at the time not have been totally mesmerized? I’m a big kid now… and still mesmerized.

The second side of the first bit of this double album begins no less magnificently as Stanley introduces Simmons and the classic track “Calling Dr.Love”, a favorite among my friends and I at the time. The climbing solo from Ace Frehley is timeless and yet another air-guitar inducing piece of work. I remember thinking back in 1977 that whomever put that track back to back with “Christine Sixteen” was a freaking genius! Yeah, I kinda felt like maybe I wanted to be someone’s Dr. Love and who better than Christine Sixteen? Never mind that I was only 11, chances are it was more appropriate for me to be playing doctor with Christine Sixteen than Gene!

Perhaps the landmark park of this side is Ace’s vocal debut on “Shock Me.” For me, there has maybe never been a better guitar solo break on a live album than on this one. OK, the crescendo on “Wang Dang Sweet Poon Tang” from Ted Nugent’s Double Live Gonzo album comes pretty damn close. This solo has everything Ace all rolled into one. Talk about an air guitar moment? Yeah! While the “live” renditions of “Hard Luck Woman” and “Tomorrow And Tonight” make for a great finish to side two of Alive II, it’s kinda hard to top “Shock Me” especially after Ace just goes off on guitar just before the final chords are dropped. Seriously, Peter Criss does a great job despite the poor guy having to follow that up!

Now with two amazing sides already planted in the brain and under the skin, and a million memories swirling though my head, I have to catch my breath to even open up the album and swap out the vinyl. So far, forty years later, Alive II is still a rollercoaster ride for the soul. A time machine if you will. Even more so when I realize that this particular copy (I have several on vinyl) not only has the “Evolution of KISS” insert but also the original order form to join the KISS Army and order everything from t-shirts to a tour program to posters, belt buckles, etc.

I’m almost lost in the fact that for a mere $5, anyone could join the KISS Army (which I did back then) when side three kicks off track “I Stole Your Love” which brings me back to KISS reality. Was my favorite KISS track then and comes pretty close to being my fave now. Blistering guitar, Stanley barking orders, killer solo — yeah, still a badass track to these ears. I’m once again lost in the audience.

While it may not have been the coolest way to learn about KISS, hearing “Beth” on the radio is still a special memory to me and the “live” version always gets me choked up. It comes with many memories. Hell, KISS comes with many memories in my life. Even hearing “Beth” during the very awful flick “Detroit Rock City” took me back. The Alive II rendition is a whole other thing because you feel as if the audience is part of the “me and the boys are playing” thing. But Peter doesn’t just shine on KISS’ most well-known ballad, when the band kick back in on “God Of Thunder”, the Catman shows why he is an influence on so many drummers since. His drum solos on both Alive! and Alive II are textbook examples of air-drum inducing pieces. So much so that the solo almost completely takes over Gene’s spotlight on “God of Thunder” and as American teenagers, we all just wanted to be the guy playing those drums. Yeah, even a guy like me who is more singer/songwriter/guitarist… To this day, I can’t play drums to save my life.

Stanley and Simmons take the live portion of the album home with back to back blasts of “I Want You” and super anthem “Shout It Out Loud” leaving little room for disappointment yet leaving the audience screaming for more. While they may have actually received more in the actual concert, on record fans were left to flip over to the final side for a whole different experience — five brand spanking new studio tracks!

Finishing off Alive II with what amounts to pretty much an EP of new tunes, KISS once again did not disappoint. From Stanley’s rocking track ”All American Man” to a fun catchy cover of the Dave Clark Five‘s “Any Way You Want It”, side four is once again everything KISS was in the mid-seventies — loud, fun, bold, and full of hooks. Gene follows up with an ode to touring America a la “Rockin’ In The USA” before settling back into creating the mystery on “Larger Than Life.” To this day, many still chuckle when wondering who Gene was trying to more convince, the fans or himself but no matter what, the song is cool and the solo stellar (even if Ace himself didn’t play it) and leads up to perhaps the coolest song on side four — “Rocket Ride” which for sure Ace did play on. Heck, he even wrote and sang on it. Not only maybe the coolest tune on side four, but certainly one of the coolest Ace songs ever! In 1977, it also contributed to my air-guitar addiction. Listening to the climb up to the amazing solo right this second has me bobbing trying not to make typos. Geez, what a great track — even now 40 years later.

Alive II pretty much marked the zenith of KISS’ superpowers with the amazing Double Platinum and solo albums to follow. While the band was still to put out amazing work, Alive II marks the end of the period of the original KISS ruling the world. And that’s OK. With a body of work that at the time included six studio albums, two live albums, and a triple commemorative retrospective limited release in a mere four years, one can hardly complain about whatever direction KISS took next.

And to be honest, for a 51-year-old kid looking back fondly with goosebumps to a time when the world was still new and exciting, I could give a rats ass if anyone complained. For me, it was and always will be magic. Even if Gene did turn out to be a twit — lol.

The extended tv commercial for Alive 2!