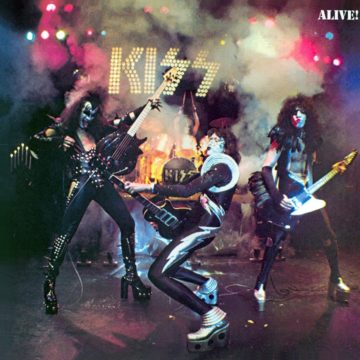 Review:
Throughout the ’70s, my jukebox heart was filled with more than enough great music to warrant having to empty the change box out every hour. The radio, a never ending tuning knob of musical possibilities that, when tag teamed with a growing pile of vinyl, cassettes, 8-tracks, and even reel to reel offerings, created a magical amusement park of sounds. But while to a kid just barely a decade into rock and roll existence, the sum of so many musical sounds may have been spellbinding, the anxious desire created by the audience amped emotion of live albums turned out to be a daydream factory creating visions of the yet to be discovered world of the live concert experience.

My ’70s adolescence upbringing barraged by the mental inducing live sounds of histories greatest live records including Frampton Comes Alive!, Ted Nugent‘s Double Live Gonzo, Live And Dangerous featuring Thin Lizzy, of course Cheap Trick‘s Cheap Trick At Budokan, and last but certainly the most, the album that commercially put KISS over the hump, 1975’s live rock and roll classic double album Alive!, which had me all but drooling for a direct introduction to the concert adventure. Yeah, KISS‘ Alive! was a double sided pick up line that was impossible to resist and like most rock loving teens of any era, I about lost my ever loving mind waiting to pop the concert cherry and flipping the vinyl over and over and over again only made the wait harder — kind of like a contact buzz before even leaving the house. If it wasn’t for other highs like racing bikes, chasing girls, and plenty of soda and candy still made with real sugar, I’m not sure how I would have survived.

Much like Alive II book ended the second trio of albums in the KISS catalog, just two years earlier in 1975, Alive! closed the chapter on the first three records. In contrast to the mildly received studio releases though, Alive! ended up being a double album explosion of live sight and sound that finally captured the true energy of the band’s music with 16 rock and roll classics littered with now classic stage raps and legendary solo spots. In a single two-fisted risk of a release, KISS and Casablanca Records finally clued in an unsuspecting record buying public on what many live rock and roll audiences already knew — this hidden rock and roll gem was actually the “hottest band in the land” blowing away audiences and scaring other touring bands off with their over-the-top face melting stage show and rock and roll message. With J.R. Smalling‘s now legendary words, KISS‘ introduction to many may have come off a bit narcissistic but still rocking a whopping seven tunes from their debut despite having three records worth of material to pull from clearly shows a belief in the songs from the very start. Heck, Alive! even kicks off with a pair of now classic tracks from that first one in monster KISS live opener “Deuce” and fan fave (and just as often covered) song “Strutter.”

In the ’70s, KISS may have looked like a four-headed rock and roll monster but now even years after, Paul Stanley and Gene Simmons took over full ownership of the band, it’s clear looking back that the Starchild and the Demon were manning the ship. Certainly Ace Frehley‘s guitar work helped to create a signature KISS sound and Peter Criss‘ jazz influenced drums and raspy vocals added additional character but even the quickest glance over the songs on Alive! offer proof that the heavy lifting came courtesy of Stanley and Simmons even if the bill at first was fronted by manager Bill Aucoin‘s American Express card. Aucoin (and label owner Neil Bogart) must have seen something in the combination of songs, show, and determination in footing the bill for three studio albums, a traveling stage show complete with road crew, outrageous publicity stunts, and finally a highly packaged double record gatefold live rock and roll release befitting groups of only the highest stature. In the end, the proof is in the pudding as Alive! would put KISS nearly over the top positioning them for the massive success of Destroyer and along the way influence enough kids to pick up instruments and partially create an entire new genre of music a la hair metal of the ’80s. And it all pretty much started by KISS pilfering three ignored records worth of tunes in an energetic live rock and roll album that some consider to be the greatest live release of all time.

While Alive II may pay homage to songs from albums from KISS‘ peak (Destroyer, Rock And Roll Over and Love Gun), the true live wax energy of KISS can be found on their first 1975 live release recorded when the original foursome were at their most hungry and most desperate for gold standing on the thin edge of failure and success. Thank goodness for KISS fans everywhere. Alive! achieved the unexpected creating the launch pad to torpedo KISS into not only rock and roll stardom, but pop culture eternity. Not only rawer, but as history has shown, Alive! also stands as actually a more “live” release than its concert follow up and more importantly, the songs deliver a wider rock and roll scope than the character driven show tunes to come, and years later most are considered rock classics.

Of the tracks taken from the band’s 1974 debut, “Deuce,” “Strutter,” “Firehouse,” “Black Diamond,” and “Cold Gin” are set list standards with “Nothin’ To Lose” and “100,000 Years” on the edge of just as worthy. Actually for me personally, the latter of the bunch marks my favorite moment on Alive! complete with that Peter Criss solo that created a thousand rock and roll drummers and Stanley‘s inspiring rap that in my youth worked up my rock and roll soul so much that I nearly jumped off my bed while yanking the headphones out of my stereo. Until his last breath, Dad would remind me of the incident while discussing the antics of my childhood, that late night moment in our third floor military apartment perhaps told more than any other.

While KISS‘ self-titled debut is featured most prominently on Alive!, the follow ups aren’t without proper respect. In addition to a blistering rendition of the title tune from the band’s second record, Hotter Than Hell, the disc is powerfully represented with some of the band’s greatest near classics like “Got To Choose,” “Watchin’ You,” “Let Me Go, Rock ‘N’ Roll,” and one of my all time favorite KISS songs, “Parasite.” If ever there was an example of trimming the fat, KISS drop a heavy one on Alive! placing only the most rocking of tunes from their first three records and while KISS pull the fewest from Dressed To Kill, they certainly aren’t any less killer even if the first one doesn’t show up until almost halfway through Alive!.

Maybe the most notable Dressed To Kill tune found here, the live rendition of “C’mon And Love Me” oozes KISS energy and Paul Stanley machismo. It’s the tune that made half us dudes wish we were Cancers so we could sing it to a chick even if sadly, we weren’t nearly as cool as Paul. “She” maybe suffers some as one of slower, dragging moments on Alive! but even so serves its purpose well even if nowhere near as incredibly energetic and rock and roll as the power house “Rock Bottom” and the greatest (if not over covered) rock and roll anthem of all time, “Rock and Roll All Nite.” For many it was this live version of KISS‘ calling card song playing on the radio that sucked them in eventually sending rock and rollers in droves to pick up a copy of Alive! along the way turning KISS into “overnight sensations” eventually creating generations of KISS Army members fueled with personal tales dedicated to the band’s impact on not only lives, but successes.

Yeah, out of the many live records that energized my teen soul in the ’70s, KISS’ Alive! is easily not only my favorite, but also the one I am most emotionally attached to. While I had heard KISS prior, this is the first record by the band I could call my own, my mom buying it for me to get me out of a trance as I stared at its incredible concert stage cover in a German department store. Paul‘s “believe in rock an’ roll” rap during “100,000 Years” roped me into becoming a full-fledged rock and roller and only fueled what little thoughts I already had about going to a concert in an out of control blaze while sitting in my room mesmerized by the cover in my hands as I was being pummelled by the sounds pounding through my enormous headphones stole my soul for life. To this day even just thinking about the sound of Peter‘s drums crushing across my ears gives me goosebumps.

Maybe the biggest proof of this record’s greatness is that even now, 45 years later putting this one on my turntable still makes my teen heart come Alive! despite the fact that I’m now bearing down on 55 (oh yeah pun TOTALLY intended). You will be hard pressed to find a KISS record that I do not enjoy at least some but I truly believe in my heart that had I never been exposed to Alive! as a teenage rock and roll sponge, I’d have not been so eager to buy in to KISS full-time from start to finish. Matter of fact, each and every time my interest in KISS has started to wane, or the band do something that makes me go “ugh” (like when Gene opens his mouth), my go to in order to stay on track is Alive!. Never fails. If ever I need a reminder of why I love KISS, this double slab of rock and roll greatness does it for me and my teen heart remains forever grateful. Grateful that until my final breath, I have the vinyl license to rock and roll all nite… and I party some days. At least as often as my old ass is able.

Production:
Produced by Eddie Kramer
Recorded on May 16, 1975 at Cobo Arena in Detroit, Michigan; on June 21, 1975 at Music Hall in Cleveland, Ohio; on July 20, 1975 at the RKO Orpheum Theater in Davenport Iowa; and, on July 23, 1975 at Wildwoods Convention Center in Wildwood, New Jersey