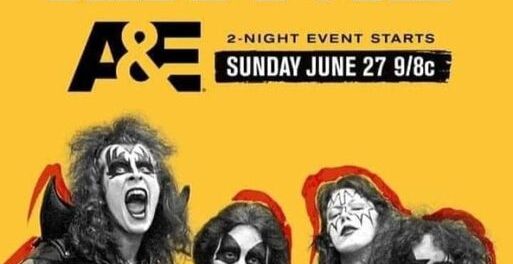 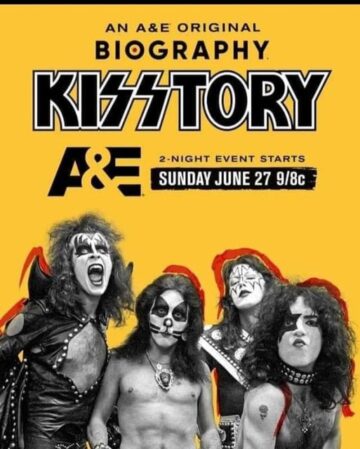 Review:
When I first saw that the television channel A&E was going to televise a four-hour biography over two days on KISS, I wasn’t that excited but obviously, as a big KISS fan back in the day, I would watch it in any case. My excitement started to build as I set my PVR to record the two episodes and noticed that A&E was televising all of these other biographies including well known wrestlers “Macho Man” Randy Savage and the Ultimate Warrior. That reminded me how A&E specializes in putting together these type of biographies. After watching Macho Man‘s biography on A&E, I now had a real sense of excitement about KISS‘ upcoming biography special on A&E. I had no doubt that A&E would cover KISS‘ history from start to finish but I did wonder if there was anything else to be said about KISS despite the group having never really provided a comprehensive biography from A to Z.

I remember how disappointed I was seeing KISS‘ Exposed VHS video back in the day. Obviously, I was enthralled by the KISS in makeup video footage, which up to that point had been difficult to find but there was just a real lack of story telling from the band. It was just humorous and silly clips of Paul Stanley and Gene Simmons surrounded by scantily dressed (and gorgeous) females, and once in a while, they would pop in a video or some very “rare” live KISS in makeup footage. The three KISSology DVDs were cool but again didn’t tell the KISS story. Sure, you could read one of the original KISS members’ autobiographies but those only give you a one-sided perspective from one individual. A&E‘s upcoming biography had the chance to right that wrong, and I can happily say that it did.

Probably to no one’s surprise, two original band members didn’t participate in A&E‘s biography. Of course, I’m talking about Peter Criss (drums) and Ace Frehley (lead guitar). After a little while, Part 1 of the A&E biography indicated the following disclaimer: “Ace Frehley and Peter Criss declined to participate in the creation of this documentary and do not endorse the views in this program.” Part 2 had the disclaimer front and centre right from the start. Given Frehley and Criss‘ on again, off again history with the group, and the fact that they have yet to be included in the band’s monumental End of The Road World Tour, it made sense that each of them elected not to participate. It’s obviously a shame that they couldn’t make the effort to be part of it (perhaps they wanted too much money?) but whatever the case, in a way, it was fitting to KISS‘ history that the two weren’t there when it counted. It was a nice touch to have snippets of audio recordings from old interviews with Frehley and Criss playing from time to time as A&E was able to provide some of the duo’s perspectives, even if they elected not to participate.

All the rest of the expected suspects participated including original producer Eddie Kramer (who produced the band’s landmark live album Alive!), renowned producer Bob Ezrin (who produced KISS‘ breakthrough studio album Destroyer in 1975 but also their very poorly received record Music From The Elder in 1981) and guitarist Bruce Kulick (who was the band’s main lead guitarist during the non-makeup days) along with current KISS members Eric Singer (drums) and Tommy Thayer (guitar). Unfortunately, almost 50 years after the band started, a number of key people were no longer around including original manager Bill Aucoin, Casablanca Records president Neil Bogart, guitarist Mark St. John (who played on 1984’s Animalize) and drummer Eric Carr (who passed away from cancer at the young age of 41). There were a few unexpected commentators such as Rage Against The Machine guitarist Tom Morello and Foo Fighters frontman Dave Grohl who each provide kind of a “fan” perspective throughout the documentary. Not surprisingly, there was no participation from guitarist Vinnie Vincent who has brought lawsuit after lawsuit against KISS with seemingly little success. Why would Stanley and Simmons really want anything to do with Vincent at this point?

Overall, it didn’t feel like I learned that much new information on KISS while watching A&E‘s biography on the band but it was a fun watch and nice to see and hear Stanley and Simmons admit when they made mistakes from the ill-advised concept album Music From The Elder, to the rotating guitarist spot in the early ’80s, to Simmons‘ lack of focus in the band during a part of the ’80s. There are so many great parts in the A&E biography including when Stanley acknowledges the following about chasing success (with the Music From The Elder album) and I am paraphrasing, “By chasing the people who don’t like you, you forsake the people who support you.” Probably the greatest part of A&E‘s biography on KISS is that it is centered on the band’s two main men — Paul Stanley and Gene Simmons. Who better to tell the story of KISS than those two guys? Kudos to the duo along with A&E for recognizing that this was a good time to get the documentary done before God forbids, one of the two KISS mainstays pass away or are simply unable to participate due to whatever reason. I give an A mark to A&E‘s KISStory. It would have given it an A+ if KISS could have somehow convinced (or allowed) Frehley, Criss and Vincent to participate but I realize that some bridges have been burnt and are simply not meant to be put back together.

KISS‘ “A World Without Heroes” album:

KISS‘ “God Gave Rock And Roll To You” video: