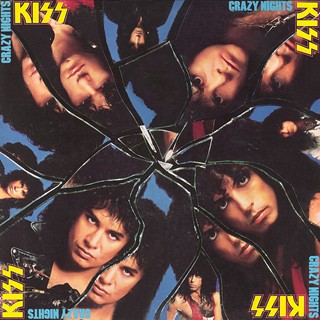 Review:
It had been two years since the mediocre Asylum album, and KISS was wanting to make a big splash. The hiring of Ron Nevison (of Survivor, Heart, and Ozzy Osbourne fame) to produce was proof that Gene Simmons and Paul Stanley were putting all their eggs in the super-producer basket. Long gone was the make-up, and for that matter the mystique of the band, but they would always have the stage show — although even that had started to decline to mid-size venues. With all members on board, it looked like the time was right for a career comeback album from KISS. What we got was Crazy Nights, a good effort, but ultimately too glossy a product. Gone was the grit and the sweat, and the danger wasn’t quite as dangerous — we were left with an ultra-smooth, overly-processed generic ’80s rock effort.

Don’t get me wrong, there are some good songs on the album. “Crazy Crazy Nights” is a guilty pleasure that is hard to get out of your head, while “Hell Or High Water” and “Turn On The Night” are also standout cuts. But there are also too many songs that feel like filler cuts, such as “Bang Bang You” and “No, No, No” (really, who comes up these names?), and KISS‘ fascination with the keyboard hit new heights on “My Way” and “Reason To Live” (for some reason I feel the need to blame Aerosmith for that). So who is truly to blame? I blame Ron Nevison for a heavy handed approach, and KISS was in such a fragile state at the time that they effectively let Nevison neuter them.

It should also be noted that of the 10 song on Crazy Nights, eight had outside writing credits — KISS was obviously doing all they could to keep themselves afloat and were constantly reaching for straws. The guitar playing was excellent as usual though with both Paul Stanley and Bruce Kulick hitting all the right notes while drummer Eric Carr continued to prove that he was a master of the kit.

All in all Crazy Nights isn’t a terrible album (like Asylum), but it is just too sanitized and pretty — and that is something that rock should never be. It took some time, but KISS finally realized what they had to do and starting with the next thwo albums — Hot In The Shade and Revenge — created a miraculous turn around.