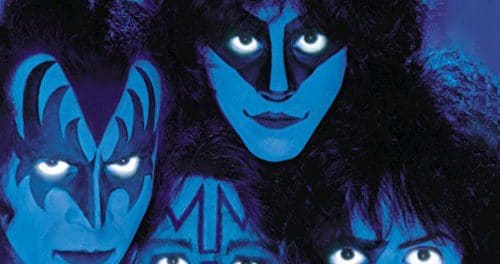 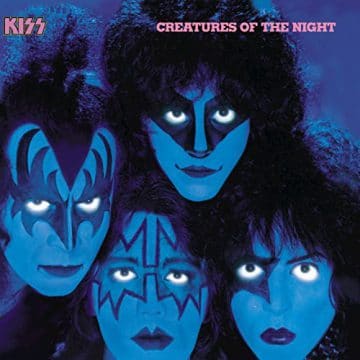 KISS
CREATURES OF THE NIGHT
Released on October 13, 1982 (Casablanca Records)

Review by John Stoney Cannon:
For many, KISS’ 1982 release Creatures Of The Night represents a return to form after the group veered away from its usual fare of libido-inspired anthem rock. Starting with the 1978 multi-release of the group’s individual solo albums, the KISS band members started to not only grow apart from each other personally but musically as well with founding members Gene Simmons and Paul Stanley eventually taking over all things KISS. Dynasty in 1979 helped grow the band’s following in Europe as did the follow up Unmasked but in the process brought with them a more polished sound featuring hints of disco, pop, and bubblegum music. Interesting since label head Neil Bogart started his music career in the ’60s building up Buddah Records, a label known for assembly line bubblegum product. Once the ’80s hit, drummer Peter Criss was gone (replaced by unknown Eric Carr) and the band released the concept album The Elder while pretty much pushing lead guitarist Ace Frehley out the door. Carr was barely in the door and it looked like the house was coming down.

Then out of nowhere, KISS released the headcrushing album Creatures Of The Night and the band was reborn to take on the ’80s! Plain and simple? Not exactly. True KISS fans know that the seeds for KISS’ slide into the very colorful (and rocking ’80s) started with the release of the compilation album Killers, a sort of “greatest hits” album released outside of the US in an attempt to recover from the commercial failure of The Elder. In addition to containing mostly classic rocking tracks from the band’s ’70s heyday, each side also started off with two new tracks. The new songs, while not exactly great tunes, introduced a new sound from the band that would carry them to new heights of popularity throughout the ’80s. Later in 1982, the world would meet the Creatures Of The Night on that most evil of days, October 13th.

While Creatures marks the official album “rebirth” of KISS, it also stands as the place in KISSstory where the band official split in half with Frehley leaving the fold and Simmons and Stanley pushing forward with new members. It is also the second time the band chose to move on by releasing albums featuring new musicians while crediting departing ones (Criss’ face graces 1979’s Dynasty and 1980’s Unmasked despite his contributions being minimal to none) as Vincent Cusano handled a large part of the lead guitar playing and contributed to the songwriting on Creatures. Of course, the world would eventually come to know Cusano as Vinnie Vincent, the guy who claims he saved KISS by contributing to a couple of albums and tours before starting and screwing up his own solo band and eventually retreating into the woods. But that’s another story.

In 1982, many fans had moved on to other bands, most of them inspired by KISS and oddly enough, the rock and roll train was moving pretty well without KISS so when the band released the album and video / single “I Love It Loud” in October, it didn’t make the massive impact the label and group had hoped. That’s sad as the album to this day exists as a fan favorite with many claiming it was what they were waiting for — hard driving anthem rock and roll. Yeah, it didn’t sound like classic ’70s KISS but in the ’80s, despite an air of cheese all around, ’70s KISS wouldn’t have flied. KISS needed to up their game and with Creatures, they did just that and even if Vincent did turn out to be a putz, at the time his over the top lead style and writing gave the band just that little extra bit of an edge that along with Carr’s pounding drums transforming KISS into a whole new monster (pun not intended).

Despite being their final album for label Casablanca, Creatures Of The Night starts off a run of mainstream familiar albums on which KISS built their new sound resulting in a return to platinum sales and larger venues with less empty seats in America. It would also introduce the dynamic of albums featuring only vocal tracks by Simmons and Stanley eventually moving Stanley into the driver’s seat musically. But at the time, KISS were firing on all cylinders by releasing an album chock full of great hard rock from both remaining band members.

Kicking off with the title track, the band come out of the gates full force complete with chugging guitar, pounding drums, a siren of a vocal from Stanley and just an all-out head-banging metal assault. The break into the guitar solo is made for air guitar fanatics with the solo itself brutal. Simmons‘ track “Saint And Sinner” is no less rocking just a more grinding style that down the road Simmons would eventually overuse but in 1982, the song comes off as a great way to go after the fast driving vibe of Creatures. The lead solo shows Vinnie capable of more than just shreds and shrills helping to bring melody to this chugging number.

If there is a track on Creatures that could have made great stripper dance material, it would have to be “Keep Me Comin’” with its great ass-shaking grind style groove and sexually-motivated lyrics. Five bill garter material for sure. One of my fave tracks on the album. While not one of my fave KISS tracks, “Rock And Roll Hell” does provide a nice change in tempo before kicking things back up on “Danger”, yet another killer Stanley track on Creatures. But after some incredible hard rock from Stanley, it’s at this point that Simmons truly pulls up his spikes and grabs hold of the hard rock reigns delivering three great yet altogether different tracks to finish off the album.

To this day, “I Love It Loud” with all its simplicity remains an audience grabbing anthem. The flow of the lyrics paired with the chants just beg for audience participation and in the world of heavy metal, what better topic is there than volume? “Love” and “loud” in the same phrase? Perhaps Simmons’ play on ying and yang, just add the skull crushing drums and you have a recipe for arena-filling hard rock bliss. But that’s not enough for Simmons, the demon closes off the party with “Killer”, a driving tune reminiscent of Deep Purple’s “Highway Star”, and the song that inspired half a dozen wrestling intro songs — the gut grinding “War Machine” a track that to this day makes driving in bad Atlanta rush hour traffic tolerable. If that doesn’t make sense, you’ve obviously never experienced creeping through Atlanta late afternoon.

Now while Simmons does close Creatures with some strong songs, Stanley is NOT missing from the tail end of the album matter of fact. Power ballad “I Still Love You” to this day remains one of the most striking songs in the KISS‘ musical arsenal. Where most wouldn’t expect KISS capable of expressing a sense of heart pounding urgency via song, Stanley provides a soundtrack for any guy looking to get across a strong desire to get back the girl of his dreams.

So yeah, Creatures Of The Night, not the greatest KISS album ever, but far from the worst I would venture to say for me, it’s in the top 10 (not counting live and solo albums). What the album certainly possesses is a playability that works from start to finish. Not a bad track on the album and together it all fits.