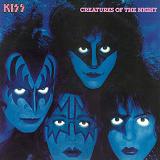 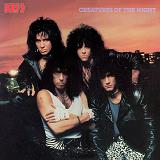 Review:
From 1978 till somewhere around 1981, KISS had done something many fans thought unimaginable…they followed a trend! That trend was Disco. Dynasty and Unmasked saw KISS trading heavy guitars and drums for the lighter, more danceable beats and sounds of Disco. The fans answered back by not buying the albums and KISS suffered their worst album sales in the History of the band. Throw into the mix a failed concept album in Music From The Elder and you’ve got a very good recipe for losing your fan base.

KISS was in trouble and they knew it. After Music From The Elder flopped and flopped hard, KISS had to do something to regain the large fan base they once held. So they finally decided to listen to their fans and create their heaviest album in almost 10 years, Creatures Of The Night. This album was also the first not to have all four original members actually playing on the songs. There were a slew of guest guitarists on the album ranging from Bruce Kulick‘s brother Bob, to none other than Vinnie Vincent, who would later be the great Ace Frehley‘s replacement.

Creatures Of The Night was a true return to form for KISS. From the opening title track, to the pulsing closing number, “War Machine”. Eric Carr does his best drumming on this album and even tries his hand at playing bass on the Paul Stanley power ballad “I Still Love You”. From beginning to end our senses are pounded with the raw power this album screams with. Paul and Gene both sound great vocally and musically on this album which I feel is probably their best out of any of the albums released in the 80’s from KISS.

Unfortunately, this album failed to garner them the comeback they were asking for with the release of this album, but then, what can you expect from fans who were used to receiving dance records for the last 3 or 4 years prior to this album. KISS had been promising a heavy album for at least that long and when they finally delivered, almost no one was around to hear it. It wouldn’t be until 1983’s Lick It Up that KISS would finally get the comeback they were looking for and only because they had used taking off their trademark makeup to entice fans back into the KISS fold.

Seen as one of KISS‘ most underrated albums of all time, Creatures Of The Night finally brought the band back full circle to the music they were made to play, true Hard Rock. Not until Asylum would we see KISS start to sway towards trendy pop-metal again. If you’re looking for the album that best represents the KISS of the 80’s, Creatures Of The Night is definitely that album. I give this album 5 out of 5 stars.