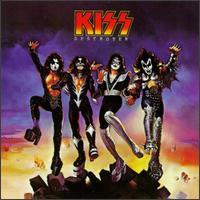 Review:
This was the fifth release from Kiss, and after the success of Alive!, would either make or break the band. Luckily charting singles such as “Shout It Out Loud” (#31 and the monster rocker), “Detroit Rock City” (#7 and which would later inspire a movie), “Flaming Youth” (#74) and of course the mega-ballad “Beth” (#7 with Peter Criss on vocals, and perhaps Kiss‘ most recognizable song) helped shoot the album to the Top 20. Top the album off with rockers such as “King Of The Night Time World”, “God Of Thunder” and “Sweet Pain” and you have yourself a hard rock classic.

Destroyer also experimented with sound effects, had three different lead vocalists, and went on to sell over a million copies. This could arguably be Kiss‘ finest studio offering, and comes from a time when the band was at the height of their popularity and musical genius. This timeless classic receives two thumbs up!